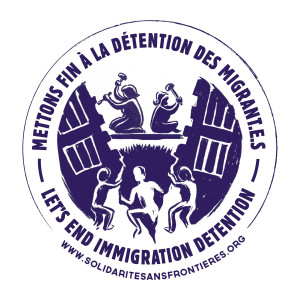 More and more migrants who are fleeing their homes to escape persecution, war and misery, or for economic opportunity, find themselves behind bars. The Canadian state reserves itself the right to detain without charge any migrant in the immigration and refugee process, including children, for indefinite periods of time. On any given day in Canada, there are upwards of 500 people in immigration detention centres. Detention is an integral part of Canada’s immigration regime which criminalizes people for who they are as migrants, and not for anything they have done. The act of being a migrant essentially becomes criminalized through detention.

The supposed reasons for detention are arbitrary. It is up to the discretion of the border guards and immigration bureaucrats to throw people into detention for not having valid identity documents, by claiming suspicion that they will not show up to their next immigration hearing, or by deeming newcomers a flight risk. Detainees are often excluded from bail and have no idea when and if they will be released. Immigrants in detention centers have minimal access to legal and translation services which prejudices their ability to make claims and applications in a timely fashion.

The Canadian state is not stopping there: it wants more and more migrants to be put in detentions centers. The current Harper government is proposing a new piece of legislation, Bill C-49, that would further criminalize migrants and refugees for traveling by irregular means, and enforce mandatory detention until their eventual removal. This bill further reinforces a “Fortress Canada” and will compel migrants and refugees to take even more dangerous, costly, and precarious routes to get to Canada.

The Immigration Prevention Center in Laval is the nearest immigrant detention center to Montreal, where upwards of 100 individuals and families are detained at any given point in time. Migrants are also often detained in maximum security prisons, such as Rivières-des-Prairies (RDP). We demand the immediate release of all detainees in immigration detention facilities, and organize for the closing of all detention centres.