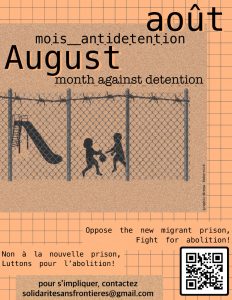 In 2016 the federal government announced plans to build yet another migrant prison in Laval, Quebec. According to the Canadian Border Services Agency (CBSA) this new prison is expected to hold up to 158 migrants at any one time. Originally slated to open in 2021, this new prison, however, has yet to open. Given this delay, there is an urgent need for us to organize against its continued construction. The time to oppose this prison is now!

This August, Solidarity Across Borders will be commencing a month of action devoted against this new migrant prison. Through public events, workshops, teach-ins, and media our collective efforts will be geared towards communicating an unambiguous message to the federal government: we oppose detention in all its forms! Status for all!

While the CBSA has been reluctant to release updates on the project and its current state of construction, its planned opening is imminent. Unless, that is, we collectively organize to stop its completion. Halting this project would be an important step in opposing racist settler-colonial border practices and work towards the broader goal of ending detention in Canada.

The continual policing, surveilling, and detaining of migrants at the border who are escaping the dispossession and injustices brought on by colonialism, militarism, and global capitalism is a grim reminder of Canada’s colonial past and present. Yet the federal government insists on robbing the freedom of migrants, uplifting colonialism and state abuse. All the while supporting extractive Canadian mining industries that profit abroad, as well as exploiting migrants with precarious status that provide cheap labour to Canadian capital at home. These social forces converge at the border but are not confined to this physical space. More than a geographical marker, border enforcement and detention expand the Canadian state’s control over migrants’ freedom.

Despite the CBSA’s claims that detainees are treated humanely, nothing can be further from the truth. The conditions within these migrant prisons are deplorable. Detainees have organized hunger strikes to protest unsanitary conditions, cramped living quarters, and psychologically punishing isolation. Detainment also separates families and can include holding children in prison. If detained migrants are granted release, many are forced to wear monitoring bracelets in addition to checking in with the CBSA on a regular basis or other restrictive conditions. This extends beyond the prison while leaving all migrants with precarious status more vulnerable, as the fear of detention leaves them with fewer options to deal with exploitation in the workplace, domestic violence, and other forms of systemic abuse.

Given these interlocking sets of practices and policies, it is imperative to reject the federal government’s rhetoric and oppose the expansion of the CBSA’s mandate. Stopping the pending opening of Laval’s new migrant prison is a key part of a larger struggle to imagine and create a world where migrants, their families and communities don’t have to live in fear of being imprisoned. While calling for an end to all forms of detention, we instead demand a comprehensive, ongoing and inclusive regularization program for all migrants. The alternative to detention is clear: Status for All! Join us as we continue the important work of building a world without borders and prisons.

Free them all! Status for all!

Parc Vinet (Next to CEDA)

Food at 7pm. Screening at 9pm

*Rally Against the New Migrant Prison

← Status for All … AT LAST!
18 Sept. URGENT! Regularisation for All: No Exceptions, No Discrimination! No One Should be Left Behind! →