Statement of Support for Indigenous Struggles and Sovereignty 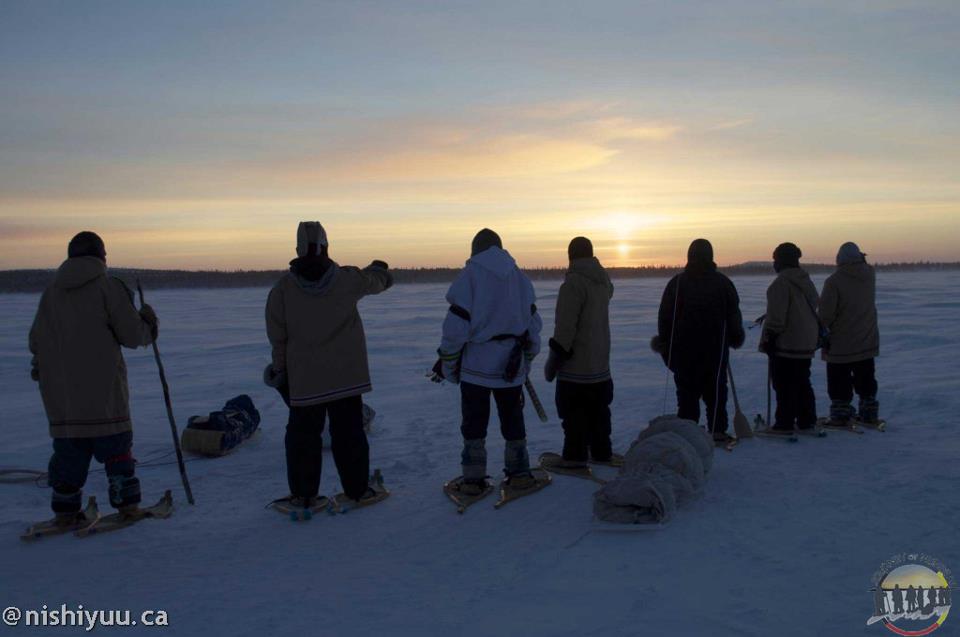 (Today, March 25, 2013 the Status For All Coalition is organizing a delegation to Ottawa to show our support for Indigenous youth who have walked more than 1000 km since early January from Whapmagoostui First Nation on James Bay. Starting in the context of Idle No More, the youth aim to help awake and unite First Nations across Turtle Island. The youth-led walk, which has grown from seven to over 150 youth in the journey south through Cree and Algonquin lands, has already been a tremendous source of inspiration and a powerful assertion of indigenous presence, strength and unity in Quebec and Canada. (More info about the march available HERE). We use this occasion to share our Statement of Support for Indigenous Struggles and Sovereignty.)

STATEMENT OF SUPPORT FOR INDIGENOUS STRUGGLES AND SOVEREIGNTY

We are the Status for All Coalition in Montreal, comprised of groups and individuals who are active in supporting migrant communities, particularly those communities faced with deportation and detention. We mobilize around four main demands: an end to detention, an end to all deportations, an end to the double punishment of migrants, and Status For All. Together, we are migrants and settlers; we are mainly non-natives, but we are also comprised of Indigenous peoples displaced from Africa, Latin American and Asia.

As migrants, we are displaced from our homelands, due to global capitalism and imperialism. This reflects a global apartheid, whereby the global South is systematically exploited and oppressed, to the benefit of the global North. However, we believe we cannot speak meaningfully about apartheid globally, and unjust migration policies, without first speaking about the realities of apartheid here in Canada.

From its very foundations, Canada has been based on the theft of Indigenous lands, and the genocide and displacement of Indigenous peoples. In crucial ways, the Canadian state’s treatment of Indigenous peoples, historically and currently, is an apartheid system – from the imposition of the Indian Act, band councils and reservation system, to stolen children and residential schools; from the continued theft of lands and resources by governments and corporations, to the cultural appropriation of native traditions and culture.

Today that legacy continues, whether through the disproportionate rate of incarceration of Indigenous peoples in the racist Canadian prison system; through the complicity of Canadian authorities in the disappearance or murder of hundreds of native women in the last three decades alone, through Children’s Aid Societies taking the place of residential schools to continue the theft of native children; or through resource extraction projects such as the Alberta Tar Sands, which contribute to the ongoing environmental devastation of Indigenous territories.

Canada’s genocidal past is celebrated in the names of our streets, towns, and cities, while continuing to erase the genuine identity of the original peoples of this land. The colonial Plan Nord in Quebec, which is predicated on the dispossession and destruction of native land, also seeks profit through the exploitation of migrant labour. The same militarized borders that separate migrants from their communities and tear families apart, also cut a swath through the territories of Indigenous nations. The same federal government that imposes its jurisdiction over Indigenous people across Canada also presumes to dictate who is allowed to enter and leave these lands.

Many immigrants and refugees are themselves Indigenous, displaced from their lands in other parts of the world by a similar colonial process that is often spearheaded by Canadian interests, especially mining companies. And so the struggles for migrant justice and Indigenous self-determination are inter-connected. The very repression, displacement, and migration of communities in the so-called global South is driven by the violent expansion of Canadian foreign policy and its aggressive neocolonial agenda, alongside other manifestations of Western domination such as the World Bank, the World Trade Organization (WTO) and the International Monetary Fund (IMF). Capitalist-driven free trade agreements and infrastructure projects – such as the North American Free Trade Agreement (NAFTA), the Foreign Investment Promotion and Protection Agreements, or the Plan-Puebla-Panama (PPP) – facilitate Canadian presence and the expansion of corporate multinationals, mega resource extraction projects, and growing military occupation, creating the conflicts, environmental devastation and economic oppression which forces migrants to leave their communities in the first place.

As Canada exploits the land and lives of people in the global South, its borders are increasingly shut to those whom capital has forcibly displaced. Canada represents a brutal colonial reality, rooted in the displacement and exploitation of Indigenous peoples and nations. Many of the places we come from also represent struggles against colonialism and neo-colonialism, against the processes of capitalist domination in our countries of origin, such as Algeria, Bangladesh, Burundi, China, the Congo, Egypt, Guatemala, Haiti, Honduras, India, Mexico, Pakistan, Palestine, the Philippines and Sri Lanka (to name but a few).

As people displaced by colonialism and neo-colonialism, we believe in the importance of allying with all those who survive and resist colonialism today on Turtle Island. In the face of more than five hundred years of colonialism, Indigenous communities continue to resist and survive. Their multifold and diverse struggles demand our active support, especially in the face of state repression and criminalization.

For those of us who are non-native, we have a role within our own communities to further the process of decolonizing Canada. Solidarity doesn’t mean just watching with sympathy but actively listening to and learning from Indigenous communities, and resisting the colonial and capitalist ideologies & policies that are responsible for genocide.

– The STATUS FOR ALL COALITION (Montreal) Dignidad Migrante (www.dignidadmigrante.org) Immigrant Workers Center (www.iwc-cti.ca) Mexicans United for Regularization (www.mexregularizacion.org) No One Is Illegal-Montreal (www.nooneisillegal.org) Solidarity Across Borders (www.solidarityacrossborders.org) and many allied individuals. ——

In addition to our Statement in Support of Indigenous Struggles and Sovereignty, the Status For All Coalition would like to highlight the tangible ways we are attempting to put our statement into practice.

This year, 2013, we organize in the context of increased Indigenous struggles for self-determination and resistance. Status For All is organizing a delegation on March 25 to travel to show our support for Indigenous youth who have walked more than 1000 km since early January from Whapmagoostui First Nation on James Bay. Starting in the context of Idle No More, the youth aim to help awake and unite First Nations across Turtle Island. The youth-led walk, which has grown from seven to over 150 youth in the journey south through Cree and Algonquin lands, has already been a tremendous source of inspiration and a powerful assertion of indigenous presence, strength and unity in Quebec and Canada. (More info about the march available here: http://nishiyuujourney.ca)

We are also expressing our public support for the community of Akwesasne, who will be protesting on March 23 against border authorities who are harassing and dividing their community. We support the self-determination of Indigenous peoples, including the community of Akwesasne. (More information about the struggle at Akwesasne available here: https://www.facebook.com/IdleNoMoreAkwesasne)

As a coalition we are attempting to learn more, from the direct voices of Indigenous peoples, through a process of popular education, listening and learning. We have endorsed local popular education events, including the recent “Decolonizing Canada” panel. We have also endorsed an anti-colonial teach-in on May 11, co-organized by the Anti-Colonial Solidarity Collective and No One Is Illegal-Montreal, to deepen our understanding about the process of decolonization.

We also re-iterate our opposition to Quebec’s Plan Nord, and the unjust exploitation of Indigenous lands and resources by natural resource corporations in complicity with the Quebec and Canadian governments. As part of opposition to the Plan Nord, members of the Innu community of Uashat-Mani-Utenam have organized protests, blockades, marches, as well as hunger strikes, and we support their efforts. We will aim to support anti-colonial and decolonization struggles year-round.