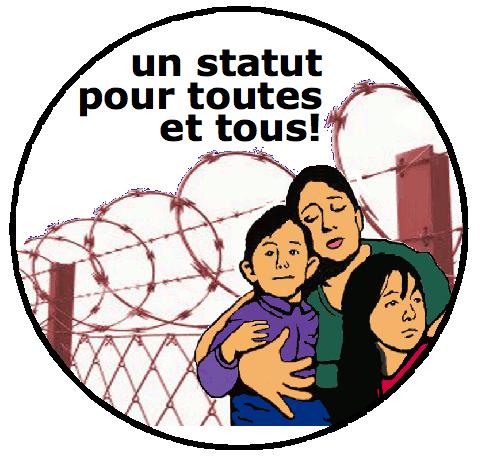 “Status for All” means that we demand a full, comprehensive and ongoing regularization program for all people living in Montreal, Quebec and Canada who do not have full status (ie. permanent residence or citizenship). “Regularization” programs have been called “amnesties” in other countries, but we prefer not to use that term, since migrants don’t need to be excused or pardoned for exercising completely legitimate and understandable choices to migrate to another part of the world, whether for economic or political reasons.

Undocumented migrants and temporary workers are the most exploited in the workplace and in society. Their existence creates an fundamentally unjust reality within our communities, whereby some people are able to access basic rights and services – like education, health care and workers’ protections – and others cannot. An individual who is non-status, or who does not have full status as a resident, can be more easily exploited because they live in fear of being removed. They often live their lives within our communities in fear and isolation.

By demanding Status for All we want to break the fear and isolation associated with the reality of being a non-status person. A Status for All demand rejects the divide-and-rule tactics used by the state to classify migrants as “deserving” versus “undeserving”, or “good” versus “bad” immigrants. We aim to create genuine solidarity and support between all migrants, whether they are new immigrants, undocumented workers, refugees, or temporary workers.