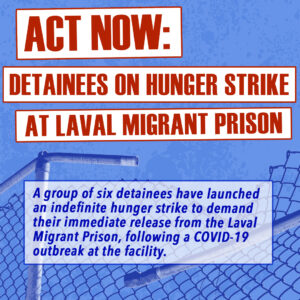 On Monday, March 1, 2021, a second group of detainees launched an indefinite hunger strike to demand their immediate release from the Laval Migrant Prison. At present, six detainees are refusing meals, despite pressure from the Canada Border Services Agency to desist.

The detainees’ courageous action underlines the urgency of the situation. The only solution to the health crisis at the Laval Migrant Prison is to immediately release all detainees! Now more than ever, their struggle demands our urgent solidarity and support.

Here are some ways to take action:

Contact government officials to demand the immediate release of all detainees! You can direct phone calls and e-mails to:

2) Your member of Parliament, find their contact information here

I am writing to ask that you release detainees held at the Laval Immigration Holding Centre. At present, six detainees have launched an indefinite hunger strike to demand their immediate release. The fact that a second group of detainees are now refusing meals underlines the urgency of the situation. All detainees must be released- with safe, decent housing ensured.

Share this call to action widely! Use the hashtag set #FreeThemAll #StatusForAll along with #HungerStrikeLaval to show your support for the struggle on social media! We encourage you to tag Bill Blair, Marco Mendicino, Justin Trudeau, and other government officials.

← Call to Action: Liberate the Detainees!
Declaration of the Inmates of the Laval Detention Centre →