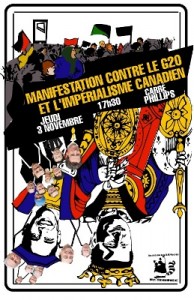 THURSDAY, NOVEMBER 3 at 5:30pm at PHILLIPS SQUARE
(Ste-Catherine West, between Union & Aylmer, McGill métro)
In solidarity with protests in Cannes (France); in support of the G20 Toronto defendants.
See you there!

—
The next G20 summit will take place November 3rd and 4th in Cannes, France. This meeting between the 20 most powerful countries on the planet will take place while Europe is in a full-blown debt crisis. More than 10 000 police and military personnel will be on hand for the occasion, but resistance is being organized and will be heard in the streets of France and Europe.

The main theme on the agenda of this G20 summit is: “The return of growth and financial stability (…) it must be demonstrated that there is a global strategy to fix the debt crisis”. It’s always the same thing that preoccupies the puppets at the head of capitalist states: “Reassure investors”! Even if this is done while butchering people’s living and working conditions and forcing millions of families into precarious situations. They don’t need to reassure ordinary people, because our future, like the future of the planet, is expendable!

The Canadian Conservative government, which pitches an image of itself on the international scene as having “better succeeded” than others in the context of the global economic crisis, wants the “Canadian model” of repressive, racist, and regressive policies that are implemented here against our communities to serve as a guiding line for all the other G20 countries.

The outlook of the next few years under the Harper government is chilly: a heightened criminalization of young people, the poor, migrants, and political dissidents, new super-prisons, austerity measures (privatization of public services, cuts to social programs and to funding for community organizations), attempts to criminalize abortion, the tightening of immigration policies and more deportations, massive military spending, etc. But in reality, we are facing the same threats as people all over the Western world: a capitalist system which is taking off its “social-democrat” mask to reveal its true face. In the global South, people have long suffered the ravages of criminals in suits who are devouring their lands.

Harper’s Canada wants to take more place on the global chess board as an important capitalist and imperialist power. For Harper, the G20 is an important site to carve his place as a political and economic leader of the global capitalist system, and to export his reactionary morals. We should fight against the Canadian government and its policies of entrenching poverty on a local scale and then exporting it globally, much like the ensemble of the G20 capitalist and imperialist states who perpetuate the accumulation of wealth for an elite global mafioso at the expense of the rest of humanity.

This barbarism has gone on for long enough. The winds of change are picking up everywhere. We have a lot of challenges to overcome, but to stay silent in the face of these horrors is to be complicit. On November 3rd, come demonstrate your anger with us in the streets of Montreal against the G20, Canadian imperialism, and the Conservative government ! Let’s show them our rage against the incessant injustices of the capitalist system !
—

Reminder:
Anti-capitalist demonstration
against the G20, Canadian imperialism, and the Conservative government
THURSDAY, NOVEMBER 3 at 5:30pm at PHILLIPS SQUARE
(Ste-Catherine West, between Union & Aylmer, McGill métro)
See you there!

← Building a Solidarity City : A conference on access to services for non-status migrants
Justice for Victims of Police Killings: Vigil, Demonstration & March →