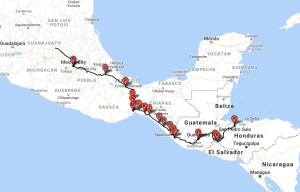 On October 12th, a group of about 1400 migrants – most from Honduras, and including many families – began walking towards the US-Mexican border to escape a situation of generalized violence, endemic poverty, and government repression which has intensified since the 2009 coup, which was supported by the Canadian and American governments. Currently, the number of people in the multiple caravans that cross Mexico to the US border is estimated at about 14,000 people. [Follow their progress here: https://cis.org/Migrant-Caravan-Map]

For years, each day, thousands of migrants have left countries in the region to try to make their way into the United States or Canada. The Caravan is only different because of the choice to travel together to protect themselves from the exploitation and danger of a trip that costs thousands of people their lives each year, and to make their desperate situations visible. Their collectivization is an inspiring political action which asserts their freedom to migrate as well as their value and dignity as human beings.

Their long and dangerous trip has already met with repression on the part of the Guatemalan and Mexican states, under pressure from the United States. They are currently in extremely difficult circumstances (at least 4 people have died and 2 buses with 80 migrants – with 65 children on board – have simply disappeared) and President Trump is threatening to send thousands of soldiers to the American border to stop them from crossing. Trump is taking advantage of their action for his own political interests – despite the fact that the American economy benefits enormously from the exploitation of migrants who enter irregularly.

In fact, Canada holds responsibility for the current humanitarian crisis in Honduras and the massive exodus to the United States: in 2009, it was the first to support the coup and recognize the illegal and illegitimate regime which carried out dozens of assassinations and disappearances, torture and imprisonment, of those who dared to raise their voices against this attack on democracy.

Canada took advantage of the situation to sign a trade agreement with Honduras in 2012 and to push through a new mining law in the country. These laws favour mining, textile, real estate and tourist businesses – such as Canadian companies
Goldcorp (which contaminated an entire area of Honduras before closing operations in 2010), Aura Minerals (their operations have just been suspended under pressure from vigorous local opposition), Glen Eagle Resources, Ascendent Resources, Gildan Activewear and Randy Jorgensen (aka “the Porn King”) – which have contributed to the violation of indigenous peoples’ rights, including the Garifuna people, and farmers, as well as the exploitation of workers.

Doubtlessly from the same economic considerations, the Canadian government also closed its eyes to the electoral coup in January 2018 and violation of the constitution prohibiting presidential re-election during the general elections last year, maintaining the illegitimate and illegal government of Juan Orlando Hernandez.

The current exodus to the North is the most visible of the consequences of Canada’s hand (among others) in the region. But, far from recognizing its responsibility to open its borders to those it helped displace, Canada has just announced that it will tackle the “backlog of cases” by significantly increasing the number of deportations, rather than by implementing a comprehensive regularization program .

We applaud the extraordinary collective organizing and courage of the people forming the migrant caravan.

We denounce racist borders which prevent people from living in dignity, with their families and their friends, and call for open borders for all.

In the context of the 2nd global day #WorldWithoutWalls, launched by Palestinian and Mexican groups, we call for direct support for the caravan and autonomous actions in solidarity. Here are some suggestions (you will surely have your own ideas!):

Details on how to support the caravan: http://www.pueblosinfronteras.org/commitees.html
Join a Caravan solidarity action near you. In Montreal, you can follow the Solidarity Across Borders website for details www.solidarityacrossborders.org
Organize an action/protest/gathering “refugees welcome/open the borders” in solidarity with the Caravan: we can share resources with you (contact us at solidaritesansfrontieres@gmail.com)
Contact the federal MP in your neighbourhood by telephone or email in order to make them aware of the situation: the current danger the Caravan is facing, the threats by Trump and the extreme right, the destructive role that Canada has played in Honduras and the responsibility Canada has to open its borders. You can find their contacts here: www.ourcommons.ca/Parliamentarians/en/members
Inform yourself about the situation and raise it in conversations with people around you.
Support the statement by Canadian delegation to IMA – https://docs.google.com/document/d/14LJJLYNyePMjQM1wpvxsIODvdthoSABB8X1eN3GcKOI/edit?usp=sharing
If you have investments in the targeted companies (see list below), sell them and encourage your networks to do the same thing …

← Solidarity Across Borders launches videos to help undocumented migrants survive encounters with the SPVM
1 December. On the road again! Evening of Artistic Performances →