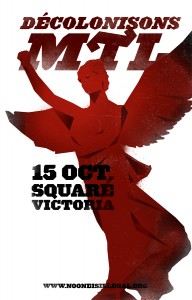 – Near métro Square Victoria
– Join our contingent by looking for the “F*#! Capitalism” banner.
– This is a family-friendly contingent.

As thousands of people across North America take the streets this Saturday, October 15, we invite you to join an anti-colonial contingent at the Occupy Montreal presence in Square Victoria, in the heart of Montreal’s financial district.

We stand in solidarity with demonstrators in New York, Boston, and countless other American cities, in rejection of this capitalist system and the misery it brings. We also recognize that those cities, like Montreal, are already occupied territory. We stand against colonialism and in support of Indigenous peoples across Turtle Island struggling for land, autonomy, and dignity. We stand against patriarchy and racism, and for the self-determination of all peoples. We are also inspired by uprisings for justice and dignity around the world, from Egypt to Chile, from Greece to South Korea.

We fundamentally reject the notion that the police are “potential allies” of our movements, and call attention to the bloody and ongoing history of police impunity and killings in Montreal. We support a respect for a diversity of tactics and a culture of solidarity and mutual aid, not division, within our struggles.

From Mohawk resistance to niobium mining in Kanehsatake, to community solidarity in the face of police repression in Montréal Nord; from anti-gentrification and social housing struggles in Montreal’s working class neighborhoods, to solidarity and support efforts with non-status migrant, this city is vibrant with people’s struggles for justice.In particular, we support two upcoming efforts: the October 22 March and Vigil for Justice for the Victims of Police Killings (info: http://www.22octobre.net); and the November 3 Anti-Capitalist Demonstration Against the G20, Canadian imperialism and the Conservative government, in solidarity with protests in Cannes and with G20 Toronto defendants (for details see www.clac-montreal.net).
———-

This family-friendly contingent is currently supported by members of No One is Illegal-Montreal, the Indigenous Solidarity Committee and Solidarity Across Borders.

If your group, collective or organization also publicly supports this contingent, please e-mail solidaritesansfrontieres@gmail.com. And be sure to bring your flags and banners on Saturday!