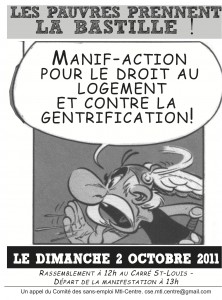 THE POOR STORM THE BASTILLE !

Demo & action for housing rights and against gentrification!

Ten years after the eviction of the Overdale and Préfontaine squats, gentrification ravages Montréal… and buildings are still empty!

On July 27 2001, in the midst of a housing crisis, 700 people took the streets – anticapitalists, homeless, community workers and many other protesters – marching towards downtown Montréal to support the opening of a political squat. The occupation of the Overdale building lasted six days. The media showed up in full force, with a steady attendance of a few hundred people. After bitter negotiations, Pierre Bourque, the mayor at the time, authorized the « occupation » of another abandoned city-owned building, the  Préfontaine Centre. The adventure lasted until October 3rd.

The occupation of an empty building on Overdale street to make a political squat, and its move to Préfontaine street would become, in our collective imagination, one of the strong symbols of the struggle of poorly housed people against the undefeatable housing crisis of Montréal.

In August 2001, the current mayor of Montréal, Gérald Tremblay, was still just a candidate in the municipal elections that were happening. He  demanded that Pierre Bourque « take any means to stop this form of civil disobedience ». Ten years later… could we also demand that Tremblay resign because of the civil disobedience of the rich, the mafia, the promoters and the speculators that continues at levels unseen since the Drapeau era ? Because corruption, bribery, crookedness and real estate have become open bars to the friends of the powerful. And what wasn’t flowing freely with housing for the less fortunate is now grinding to a halt.

The housing question is essential to quality of life for people and families. In fact, the quality of life of the majority of the Montréal population has degraded in the last 10 years.  After the right to food, the right to housing is the one right upon which all others are conditional. The rich would like to merchandize it, « mafiatize » it, or make a profit on it. The rich don’t know what it’s like to live piled up on each other ! And we’re not even talking about the 30 000 homeless… who don’t even capture the mayor’s downward  glance when his police kill them cold-heartedly !

Our society is ruled by capitalism, which profits a small minority and condemns too great a number to misery and poverty. For the Comité des sans-emploi, organization and struggle are more necessary than ever to improve the working conditions of the majority of the population. The increasing repression against those who dare to rise up only reinforces our revolt. Reclaiming food, public and private space, the right to life, and the right to the city for everyone are more important than the privileges and the interests of the rich ! Life can and must be better… here and now !