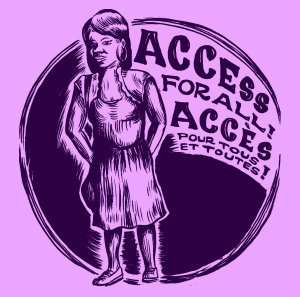 The City of Montreal adopted the “Déclaration désignant Montréal Ville Sanctuaire” on 20 February 2017. However, Montreal is very far from being a Sanctuary City, as this situation shows!

Add your name or the name of your organization

“Marcia”, an active member of the Non-Status Women’s Collective of Montreal, is completely blind. She lost her eyesight in late 2015. She is currently unable to work, and – because of her immigration status – is not eligible for welfare, social housing, or public healthcare. She needs professional rehabilitation services for her security and in order to regain capacity and autonomy. The Montreal Association for the Blind (MAB-Mackay) is her local rehabilitation centre.

In early spring 2016, Marcia’s ophthalmologist referred her to MAB-Mackay. MAB-Mackay refused to help because of her immigration status. In the summer, Marcia was again referred to MAB-Mackay by a CLSC social worker, with the same result. The CLSC challenged the decision and MAB-Mackay finally agreed to provide services, opening a file for Marcia by phone on 27 October 2016. However, on 21 December, Marcia was informed that MAB-Mckay had reversed its decision and remained closed to people of her immigration status.

Marcia has lived in Montreal since she left her country of birth in 1981. She currently has no legal status in her home of 35 years. She has contributed to society in innumerable ways but received little pay for her hard work as a Nanny and cleaner. Because of her status, she has had no access to public healthcare, a major reason that she is blind today.

Marcia made an application for permanent residence on humanitarian grounds in July 2016. This application may take years to be processed. If it is accepted, it may then take yet another year before Marcia has access to public healthcare.