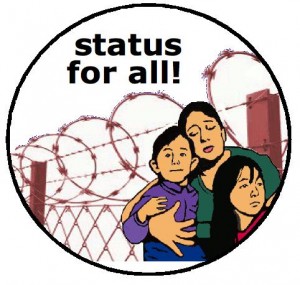 STATUS FOR ALL!
March for justice and dignity for all migrants and refugees
SATURDAY, MAY 26, 2012
Gathering at NOON
Jean Talon & Boyer, just east of métro Jean-Talon
MONTREAL

We march together to demand an end to deportations and detentions, and in opposition to the double punishment of migrants with criminal records. We demand Status for All, and organize for a “Solidarity City” for all residents of Montreal.

Get in touch about any accessibility needs.

UPDATE: Join us at NOON at the corner of Jean-Talon & Boyer. We will be marching through the neighborhoods of Villeray & Parc-Extension. Our demonstration ends at Parc Athena (Jean-Talon & Avenue de l’Epée) with a community picnic.

This is a child-friendly demonstration. Bring your kids!

We encourage all participants to wear masks in solidarity with thousands of people who live without status in Montreal, who cannot march with us tomorrow, and whose survival depend on remaining invisible and on the margins of society. Montreal migrant justice groups maintain this important tradition knowing full well that in doing so we are in defiance of recently passed municipal bylaws and Law 78. We maintain the right to protest freely and spontaneously, and will not be sharing the route of our march with the police.

This year, we march in opposition to the Conservative government’s relentless attacks on people here and abroad. We take to the streets to assert our dignity as workers, students, refugees, immigrants, and queers.

We reject the militarization of borders, the criminalization of migrants, the institutionalization of wage-slavery through temporary worker programs, and the dominant xenophobic and racist ideology. We also denounce Bill C-31, the “Refugee Exclusion Act”, an immigration law that jails asylum seekers, entrenches a two-tier refugee system discriminating against the majority based on their nationality, and gives the Immigration Minister enormous discretionary powers to take away people’s permanent residency after they have been granted refugee status. This law advocates intrusive biometrics data collection on all migrants in the country, and gives increased powers of arrest and detention to border guards that will affect tourists, permanent residents, students and refugees alike. It will also force many more people to live underground, with no access to labor standards or essential services like healthcare and education.

The march is organized in support of four main demands:

STATUS FOR ALL! We demand a full, comprehensive and ongoing regularization program for all people living in Montreal, Quebec and Canada who do not have full status (ie. permanent residence or citizenship). Simply put, Status for All means that all residents of Canada will get the documentation they need so they can access basic services and the same rights as anyone else. Status for All means we struggle and organize so that all residents, regardless of their origins, can have full dignity as human beings.

NO TO DEPORTATIONS! We stand in solidarity with those who struggle to resist their deportations and forced removals. We denounce the violence of deportations that breaks up families and uproots people from their communities. We believe that everyone has the right to migrate, the right to resist forced displacement, and the right return to their homelands if they so choose.

NO TO DOUBLE PUNISHMENT! “Double punishment” is the term used to describe the unjust policy used against non-citizens who face deportation after being punished for a criminal conviction. Double punishment is often the direct result of racial profiling. The reality of double punishment in our communities often provokes feelings of shame and isolation, due to the stigma of a criminal conviction. We aim to break this isolation by taking a clear stance against double punishment, to expose this injustice, and to support the individuals fighting to remain with their families, friends and community here in Montreal. We believe that double punishment is an extension of the prison-industrial-complex that profits from the criminalization and incarceration of entire populations.
—–

We are also demonstrating to affirm a SOLIDARITY CITY in Montreal:

For thousands of undocumented migrants across the country cities such as Montreal, Toronto and Vancouver are sweatshops. Immigrants and refugees work the most precarious and dangerous jobs. The Canadian economy cannot survive without this work force that is exploited due to the lack of permanent status and the threat of forced removal. Instead of the city being a sweatshop, we organize to build a Solidarity City.

A Solidarity City is the creation of a community that rejects a system that engenders poverty and precarity, not solely for immigrants and refugees, but also for other Montrealers confronting these same realities. We are opposing fear, isolation and division and we strike back with solidarity, organized mutual aid, and direct action.

The “Solidarity City” campaign is an attempt to generalize and broaden some key organizing principles that have been applied in migrant justice work in Montreal: networking and unifying around common and straightforward demands; practicing autonomous mutual aid and solidarity in contrast to charity or service approaches; holding decision-makers accountable for their actions and policies; and using direct action to achieve justice

All individuals and groups in Montreal can be part of contributing to and building a Solidarity City by providing support to undocumented residents, and by linking your efforts to our larger campaigns for social justice. Get in touch to learn more.
—–

HOW YOU CAN SUPPORT OUR EFFORTS:

* ENDORSE: By endorsing our demonstration and campaign you are agreeing with our demands and you will help to publicize our events within your networks.

* PUBLICIZE & PROMOTE: We have posters, flyers, as well as e-mail callouts, in French, English and Spanish. Get in touch about getting access to our publicity materials, or to join one of our door-to-door outreach teams in Côte-des-Neiges, Parc Extension, Villeray, St-Michel & Hochelaga.

* DONATE: We are an all-volunteer effort and rely on modest donations to sustain our campaign. You can donate by making a cheque out to “Solidarité sans frontières” and include “Status for All” in the memo line. You can mail your cheques to:

Solidarity Across Borders
1500 de Maisonneuve Ouest, #204
Montreal, QC H3G 1N1
Contact us if you want to make a cash donation or to organize a benefit.

* GET INVOLVED: We have committees that are doing active outreach and mobilization, as well as preparing art and other materials. Just e-mail or phone to lend your support.

* LEARN MORE: Invite us to make a presentation about the Status for All campaign to your group or organization, to learn more about our demands and the Solidarity City campaign.