Justice for the Awan family! Status for Khurshid Begum Awan! 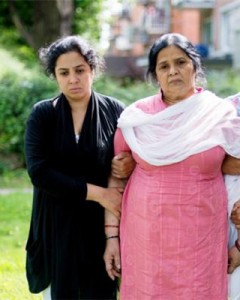 In 2011 Khurshid Begum Awan and her husband Mohammad Khalil Awan came to Montreal from Pakistan fleeing targeted violence, and to join their daughter and grandson who are Canadian citizens.

Their refugee claim was rejected, and in April 2013 Mr. Awan was detained and deported with just the clothes on his back. Mrs. Awan was ordered deported in August 2013, and courageously defied her deportation order and took sanctuary in a Montreal church.

Suffering from heart failure and multiple other chronic health conditions, Mrs. Awan, along with her daughter and grandson have spent the past year under incredible stress, while awaiting a response on Mrs. Awan’s application for status on humanitarian and compassionate (H&C) grounds.

After nearly one year in sanctuary, Mrs. Awan presented herself to CBSA on August 5th to obtain her Pre-Removal Risk Assessment application. This, along with her ongoing H&C application, constitutes a recourse that could potentially allow her to regularize her status.

This decision was taken in the face of Mrs. Awan’s steadily deterioriating health, the expiry of her medical coverage, along with tremendous stress, isolation, and exhaustion experienced by the whole family. Although Mrs. Awan is no longer living in sanctuary, she and her family continue to fight for status, justice and dignity.

One year later, the family and their supporters are holding a press conference to highlight their ongoing struggle, and to demand from immigration minister Chris Alexander that Khurshid Begum Awan’s H&C application be read and that she be granted status immediately.

We invite supporters to join us on:
Monday September 22, at 10am
Anglican Diocese of Montreal, 1444 Union St., 2nd floor