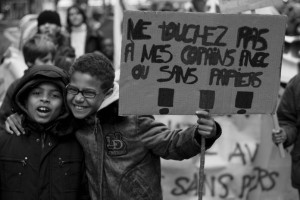 On June 5th, the City of Montréal announced the adoption of a new policy, “Access to Municipal Services without Fear.” Solidarity across Borders does not think that this policy will really benefit non-status people in Montreal nor that their lives will now be free from fear.

The adoption of this policy is definitely a victory, because the city has at last been forced to recognize the existence of non-status people in our community. This results from tireless struggles led by the Non Status Women’s Collective and other community groups, and not any spontaneous concern for the safety of non-status people on the part of the city. But beyond this simple institutional recognition, this policy will not significantly improve the conditions of undocumented Montrealers. It may even increase the level of risk they face.

The city says it will provide non status people access without fear to its services, but excludes the main source of danger: the police. As we know, the SPVM has the highest rate of calling the CBSA to check immigration status of any police force in Canada. Indeed, according to a figure from Médecins du monde, 71% of undocumented people restrict their movements from fear of being questioned by the police. Many in our network live with this fear 24 hours a day, 7 days a week.

Montreal’s new policy is thus far from meeting the principle of “don’t ask, don’t tell.” It is important in this connection to stress that nothing in provincial or federal legislation requires municipalities to contact the CBSA to identify or report non-status people seeking to access city services.

It is ironic, even insulting and dangerous, to invite non status people to the library or neighbourhood pool without guaranteeing that they won’t be arrested by the police on the way and sent to the migrant prison in Laval. Moreover, most people living without status are also racialized, making them more likely to be racially profiled by the SPVM and security agents in public spaces, such as the metro.

In this context, the identity card introduced as part of the city’s new policy may put non-status people at greater risk: they may believe it is safe to give to the police but, because it includes their real name, it will in fact allow them to be identified by the police and handed over to the CBSA, leading to detention and deportation.

Having access to a library or a pool in no way changes the fact that the majority of non-status people live in precarity and fear.

An ID Card Exclusively for Non-Status People Threatens their Security

We are concerned that the card the city is planning to introduce appears* to be exclusively for non-status people. This will officially categorize them as “undocumented,” in contradiction to the city’s expressed desire to make all Montrealers equal. To municipal services and their officials, these people will be perceived and might also be treated differently. This policy will further marginalise non status people.

We are also concerned about the collection of personal information (names and addresses) for this ID card. Nothing in the policy assures us that the information collected will not be handed over to the CBSA or the police. What is the guarantee that the CBSA and the SPVM will not be able to use legal or administrative procedures to access the data collected under this policy?

Nor can we ignore the possibility that information collected by the city about non-status people, including their addresses, may increase police surveillance of some neighborhoods. The SPVM and the city are part of the same entity; if the city does not formally prohibit police access to this data, it could put non-status people in danger, particularly because the SPVM, unlike the other administrative bodies affected by the policy, is not required to make changes to its identification practices nor to train staff about the reality of non-status community members. Moreover, we are well aware of how data is used by states and corporations for surveillance and control. This represents a further risk to the safety and quality of life of the most marginalized.

As noted above, non-status people are less concerned about access to the library or neighborhood pool than being reported and handed over to the CBSA. This is the fear that keeps many undocumented people in situations of abuse and exploitation at work and home. This fear makes them reluctant to take collective action to claim their place in society, send their children to school, seek care in the public health system, etc. An official identity card bearing the real name of a non-status person may actually increase the risk that they will be identified by the SPVM and handed over to the CBSA to be detained or deported. We regret that Médecins du monde, which runs the only free clinic for uninsured migrants, has endorsed a policy that may increase the vulnerability of these Montrealers.

In the current context, an “intervention and protection” unit will have little or no impact on the safety of non-status people

The city’s press release also mentions the creation of an “intervention and protection” unit under CAVAC. We condemn the fact that the weight of combating discrimination, abuse and violence is always placed on the backs of their victims. We know very well that people put themselves, their loved ones and / or their source of income at risk when they come forward to report such situations. In the course of the past years, we have seen the justice system’s ineffectiveness when it comes to convicting abusers. Similarly, the city’s failure to curb SPVM racial and social profiling allows police prejudices and biases to contribute to systemic racism in the justice system, directly affecting the safety of non-status people. In addition, because there is nothing in the city’s policy to prevent an abuser from retaliating by reporting a non-status person to the CBSA, it would be surprising if many undocumented people took advantage of this option. In the current context, it is hard to see what is served by the creation of this unit.

We believe that Montreal can become a Sanctuary City

We believe that it is entirely possible to make Montreal truly safe for non-status people – but not through faint-hearted gestures aimed at pandering to the liberal progressive electorate while avoiding alienating Montreal’s business elite.

For our part, we will continue to build a solidarity city through the daily practice of mutual aid and direct action. Building a Solidarity City is a collective project of pushing racist borders out of our communities: refusing to allow immigration status to determine who gets access to housing, education, health, social services, food, etc. We work to break isolation and build networks of solidarity capable of defending each other against exploitation and the violence of prisons and borders. Building a solidarity city means rejecting a system that creates poverty and suffering, not only for migrants and refugees, but for the thousands of other Montrealers facing these realities. /fr/solidarity-city

*N.B. As we do not have access to the details about how this policy will be implemented, we can’t be sure that the ID card will only be for non-status people. But it looks that way.