+ Thursday, November 28th, NOON-1pm, 1010 Saint-Antoine: 100 Days Too Many! Demo outside of immigration headquarters

Fall Feast for the Awan Family 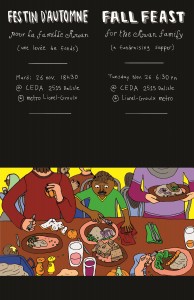 6:30pm-9:30pm
CEDA
2515 Delisle
(Metro Lionel-Groulx)
The Awan Family Support Committee and Radical Christian Association of McGill invite you to a community dinner and fall feast in solidarity with the Awan Family.
Join us for an evening of food, music, and performances to affirm support for the Awan family and to celebrate their struggle. This event also aims to raise funds to cover costs related to groceries, legal fees, and medical expenses.
Please note that venue is wheelchair accessible. Childcare will also be provided on-site. Bring your kids! All are welcome!
* Background:
For the past three months, Khurshid Begum Awan has been living in sanctuary in a Montreal church. She originally arrived in Canada in 2011, accompanied by her husband, Mohamed Khalil Awan and her grandson, Ali. At the time, the family was fleeing violence at the hands of anti-Shia gangs in Pakistan, and hoping to join their daughter, Tahira Malik, who had arrived in Canada as a refugee claimant in 2000. However, Mr. And Mrs. Awan’s refugee claim was rejected in December 2012, and Mr. Awan was deported in April 2013. Despite her fragile health, her request for a stay of removal was refused and she was ordered deported soon thereafter, with the removal proceedings against her delayed only temporarily after she suffered a heart attack in the Montreal CBSA office on July 4th. A mere three weeks later, the CBSA sparked public outcry by entering a hospital emergency room and attempting to detain Mrs. Awan and only agreed to leave after hospital staff insisted that they abide by Canada`s own guidelines, stipulating that recent heart attack survivors not travel for at least six weeks.
On August 20th, however, she was called into the CBSA`s office and given a removal date for the following evening. Despite the government`s disregard for her health and safety, Mrs. Awan courageously decided to defy her deportation. Since then, the family has been organizing a public campaign to obtain status for Khurshid Begum Awan, to secure the return of Mohamed Khalil Awan, and to ensure that the entire family- including Tahira and Ali- may live in justice and dignity.
+++++++++++
+++++++++++
100 Days Too Many!
Picket Outside of the CIC
in solidarity with the Awan Family Where: Citizenship and Immigration Canada offices
1010 Rue Saint Antoine Ouest
Metro Bonaventure When: Thursday November 28, 2013
12:00pm –1:00pm100 days of inaction from Immigration Minister Chris Alexander
100 days of surveillance and intimidation by Canadian Boarder Services Agency
100 days of living in hiding and in fear
100 days of defiance against unjust and violent government regulations

November 28th 2013 marks the one-hundredth day of sanctuary for Mrs.Khurshid Begum Awan, a Pakistani refugee who has courageously decided not to comply with a deportation order issued to her in August 2013.Facing the inability to access necessary care for major health
problems, separation from her family, and the spectre of physical violence (even murder) upon return to Pakistan, Khurshid has been given little choice but to take sanctuary in a church in order to fight against systems that work to oppress and reject her.

On this 100th day anniversary, join us in a show of solidarity and anger against the systemic exclusion of migrants in Canadian society, the violence within Canada’s Refugee and Immigration system, and the unjust reality that the Awan family, and so many like them, are forced to live with every day.

We demand that Khurshid Begum Awan be granted status immediately, that her husband be allowed to return to Canada to join his family, and that the family be able to live a life of justice and dignity.