By Gwen Muir of Solidarity Across Borders

Although Canada has been built upon the labour of racialized groups, these same groups have persistently been excluded from the state’s national imagined community, and, in turn, the rights, entitlements, and freedoms associated with Canadian citizenship. This history is maintained and exacerbated in present-day immigration policy via the unprecedented expansion of the Temporary Foreign Worker Program (TFWP) (“low-skilled” classifications).

Canada’s foundations as a colonizing settler-state have profoundly influenced past and present approaches to immigration. Until 1962, racial criteria officially structured who could and who could not access citizenship in Canada. In order to maintain “purity” in the production of the nation-state, particular (non-white) groups were explicitly denied entry to Canada in the 19th and 20th centuriesi. “Temporary” work contracts were long used as a means to secure access to cheap labour without compromising Canada’s white nation-building project, facilitating the exclusion of people of colour from Canadian societyii.

In 1966, just four years following the removal of explicit racial criteria from immigration policy, Canada created its first official “Temporary Foreign Worker Program” through a bilateral agreement with Jamaica. Soon after, it initiated the Non-Immigrant Authorization Program (NIEAP)iii. Such programs facilitated the creation of distinct immigration categories for the first time, catering differential classifications to meet the demands of the Canadian labour marketiv. Differing from preceding race-based policy, people of colour arriving under NIEAP were externalized from the nation based on their evaluation as “low-skilled” – and therefore inferior – labourers. This categorical separation worked to institutionalize and systematically perpetuate existing racisms, blocking paths to permanent residency for the majority of (im)migrants from the “global south” by separating lower classifications from “Canadians”v. Decisions on which groups were “economically preferred”, “more assimilable” and better “suited” to life in Canada remained racially prejudiced and ethnically selectivevi.

Migrant worker programs have been successful in public discourse because they strategically position migrants of colour as existing “outside” of national space (despite living and working on so-called Canadian territory)vii. This construction of difference is central to the creation and legitimization of the (“low-skilled”) migrant worker category in Canada. It is also profoundly ideological: rather than restricting physical entry, immigration classification works to contain the mobility of certain groups’ by limiting their access to state-bound protections and entitlements once in Canadaviii.

Temporary work programs have been an effective state tool for controlling the immigrant “problem” for many decades, enabling the Canadian government to channel “undesirables” into temporary migratory streams while simultaneously promoting a national rhetoric of “tolerance” and “benevolence” in immigration discourseix. 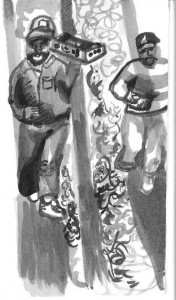 Over recent years, temporary labour has become the core of immigration policy, with temporary employment authorizations making up more entries to Canada than all other immigration categories combinedx. Since 2000, the number of migrant workers employed in Canada has tripledxi. Migrant workers outnumbered permanent economic immigrants for the first time in 2006, and since streamlining the TFWP in 2008 Canada has admitted more temporary than permanent residents each year, effectively displacing conventional citizen-track immigrationxii.

The creation of the Temporary Foreign Worker Program (TFWP) in 2002 has facilitated this surge of temporary migration, allowing for a widespread deregulated model of temporary workxiii. Under the TFWP, employers are able to source labour from any country around the world without government oversight or bilateral agreements. Workers are ranked as “low-skilled” according to Canada’s National Occupational Classification and are typically recruited by nationalityxiv. There is no path to permanent residency and workers’ right to remain in Canada is tied to their employer.

Since Harper took office in 2006, TFWP occupations have been “fast-tracked” in immigration policy, with categories and priorities single-handedly named by the Minister of Citizenship and Immigration. The state narrative behind this rapid expansion is that it is a means to fulfill a sudden “temporary” shortage in highly needed “low-skilled” labour. Framed in terms of crisis, the TFWP is depicted by the state as a critical necessity during a period of intensive neoliberal restructuring. It is cast as a “win-win” deal for both employers and employees, allowing for the satisfaction of “short-term” labour market needs and the accumulation of capital while also redirecting funds to the global southxv.

However, many migrant workers are permanently temporary, returning year after year to complete the same “short-term” contract job, while workers’ connections to labour recruitment agencies often begin with the dispossession of lands in their communities of origin via the aggression of Canadian-based corporations or Canadian foreign policyxvi. Meanwhile, temporary programs are an effective means to diminish overall wages, restricting the agency and bargaining power of workers and unions while keeping business costs low amid growing austerity measures – all the while privatizing and concentrating immigration controls to more forcefully manage the nation’s demographic characterxvii.

TFWPs have legally institutionalized the precarious concept of disposable immigration and an inexhaustible workforcexviii. With cheap labour produced abroad, employers are able to import and export low-cost, flexible personnel, without the additional expenses of generational reproduction or any long-term modification of the nation-statexix.

A “business made by business program”, private corporations are increasingly dominant in selecting who may enter, stay and work in Canadaxx. People of colour constitute a disproportionate majority of “low-skilled” TFWsxxi. This creates explicit racialized hierarchies in the workplace that reinforce race-based relations of power and oppression, with migrants placed at the bottom of the labour ladderxxii.

The naturalization of particular nationalities as only belonging in particular jobs reinforces the marginalization and racialization of migrants. In depicting workers as naturally carrying out tasks that no Canadian would accept, TFWPs actively enhance existing racist, classist, and gendered divisions and discriminations. By confining migrants to a particular task and workspace, they are strategically positioned by the state as existing separately or outside of everyday societyxxiii.

Recruitment in the TFWP gives employers the explicit power to carry out racial and gender discrimination in the workplacexxiv. Canadian employers may specify not only which nationality they prefer, but also have control over the gender, age, and preferred physical characteristics and abilities of their potential employeesxxv.

Once in Canada, migrants’ temporary and tied status place workers in an exceptional situation of vulnerabilityxxvi. For example, most migrant farm workers are housed in remote areas by their employer, have no access to independent transport, do not speak French or English (and, in many cases, speak Spanish as a second language), and must go through their employer to access outside supportxxvii. Workers pay into social services without being able to equitably claim benefits, while the time contingent nature of contracts makes it nearly impossible to access the few protections that they are entitled to (as migrants are generally deported before documents can be processed). Insomuch as the program is complaint-driven and rights are mediated by employers (and are therefore bound with recruitment), legal protections do not transmit well into practice.

Although employers must legally follow provincial labour standards, the fact that there is no structural body to enforce such regulations leaves ample room for systemic abuses. This is exacerbated by the fact that workers are not able to file a complaint without putting their status in jeopardy, risking repatriation and blacklisting. Although workers may apply for a work permit transfer, changing employers is difficult due to the long processing time for an LMO (Labour Market Opinion), while migrants are left isolated without an income or housing, subject to a removal order if presented to CBSA (Canada Border Services Agency).

The TFWP has been described as a bonded forced-rotational system, a program that induces servile status, indentured servitude or modern-day serfdom. Employer-bound work permits deny migrants the ability to move in the labour market, undermining the fundamental idea of “free” wage labour. This primarily affects people of colour, as white migrants who originate from Europe or the Commonwealth are virtually non-existent in “low-skilled” classifications and so are not subject to labour market immobilityxxviii.

There have been numerous demands put forth by workers’ rights groups for alternative approaches or amendments to the TFWP, including: providing a path to permanent residency, creating greater structural mechanisms of support and rights enforcement, and having either provincially-bound or occupational sector specific work permitsxxix. Here in Montréal, the Immigrant Workers’ Centre (IWC) has a campaign to expand accountability and workers’ rights under the TFWP, mobilizing via support and consultation with migrant workers in Montréal and other regions of Québec.

However, while these movements are important, small structural amendments alone will not transform the differential position of migrant workers and their subjugation in the Canadian labour market and Canadian society. As pointed out by Nandita Sharma (2006), migrant worker programs enable two differential systems to operate within the same territory, producing a two-tiered structure that institutionalizes “difference” in (im)migration – what has been called “a global regime of apartheid”xxx. “Low-skilled” classifications in the TFWP facilitate discrimination by differentiating and excluding people of colour to prop up the white settler-state. Beyond dismantling temporary worker programs as a whole, individuals must therefore also challenge their own racialization as well as the very colonial foundations upon which Canada’s state-enshrined borders are builtxxxi.

Moreover, with contemporary migration as a direct response to dispossession, colonialism, and current capitalist globalization, nationalisms and the nation-state paradigm itself perpetuate and reproduce the very hierarchies and structures of colonial relationships and the colonial state. Marginalizations are deeply ingrained even within the concept of citizenship. The notion that a balanced meritocracy would suddenly materialize with migrants’ access to permanent status is therefore deeply illusionary.

Migration is a right: the freedom to immigrate should correspond with the freedom to emigrate, and migrants should not have to rely on the “goodwill” of national states to access basic protections. Thus, as many within the No Borders / No One is Illegal movements have argued, it is time to move beyond the exclusionary model of statehood as a means of inclusionxxxii. After all, we are all migrants: open the borders!

Piché, V. (2012). In and Out the Back Door: Canada’s Temporary Workers Programs in a Global Perspective. In The New Politics of International Mobility: Migration Management and its Discontents by Geiger, M. & Pécoud, A. (eds). Osanbrück: University of Osnabrück Press, Institute for Migration Research and Intercultural Studies.

Satzewich, V. (1991). Racism and the Incorporation of Foreign Labour: Farm Labour to Canada since 1945. London: Routledge.

Sharma, N. and Baines, D. (2002). Migrant Workers as Non-Citizens: The Case against Citizenship as a Social Policy Concept. Studies in Political Economy, 69, 75-107.

UFCW (2011). Report on the Status of Migrant Workers in Canada. UFCW Canada: the Human Rights, Equity, and Diversity Department.

Valarezo, G. (2007). Out of Necessity and Into the Fields: Migrant farmworkers in St. Rémi, Québec. Master’s Thesis. Kingston: Queen’s University.

Walia, H. (2006). Colonialism, Capitalism, and the Making of the Apartheid System of Migration in Canada. ZNet: A Community of People Committed to Social Change, 1-5.