By the Health Justice Collective

The Health Justice Collective (HJC) came together in July 2012 in Montreal and is currently made up of activists who work, or have worked, in the health care field. Our “We Refuse to Cooperate!” campaign was developed in response to the cuts to the Interim Federal Health Program (IFHP) instituted by the Conservative government of Canada in June 2012. We aim to target the root cause of disease & illness, by addressing the social realities that often result in health problems. 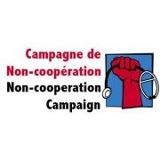 The IFHP is a federal program that provides access to health care for refugees and refugee claimants in Canada. Prior to the June 30th cuts, the IFH Program, already criticized for its restrictive nature, provided coverage for “essential and urgent services”, including medication and some preventative care for refugee claimants. The cuts to the IFHP are intimately linked to the Protecting Canada’s Immigration System Act (Bill C-31), more aptly known as the Refugee Exclusion Act. They essentially deny health care services (including hospital services, medical services and medications) to a significant number of refugee claimants, with the exception of persons whose health issues “threaten public security or public health”.  Only refugee claimants coming from certain countries are able to access “urgent and essential” health care services, but no longer have access to medication to treat their disease, unless it represents a “threat to public health or public security”. Meanwhile, dental, vision, psychological, preventive and rehabilitative care are no longer covered. Although the Quebec government announced that it was implementing measures to reverse the effects of the cuts, and restore certain forms of access to medications and health care services, on the ground, people who are supposed to be covered by the IFHP or Quebec’s supposed compensatory measures continue to be denied services on a daily basis. Meanwhile, health care access for hundreds of thousands of non-status migrants in Canada is virtually non-existent.

We affirm that the IFHP cuts and the Refugee Exclusion Act demonstrate the government’s intention to further entrench a political climate that is more openly hostile to migrants. In the context of on-going and draconian changes to immigration policy, the Refugee Exclusion Act is causing and will cause an increase in deportations and detentions of immigrants and refugee claimants. The act will prevent more people from accessing permanent status in Canada, resulting in further precarity. The Canadian government is clearly motivated to shut its colonial borders to those have been displaced and are seeking a more dignified life, while commodifying migrant bodies that cater to Canada’s own economic and labour agendas.

The very concept and implementation of the so-called “Designated Countries of Origins (DCO) category is an infuriating illustration of the impact of the Refugee Exclusion Act and the IFHP cuts. As of December 2012, the federal minister of Citizenship and Immigration has the power to designate certain countries as being “safe”. Migrants coming from a “designated country of origin” are no longer entitled to any coverage for medical care, even when urgent or essential, unless suffering from a health problem that could impact “public health or safety”. DCOs are countries that the government considers (rather arbitrarily) as “safe” – the list includes, among others, Israel, Mexico, Hungary, and the Czech Republic. Refugee claimants from these countries have their applications fast-tracked and have less time to submit their claims. They also have less access to certain legal avenues after a refusal of their application (e.g. they do not have access to the new so-called Refugee Appeal Division). The DCO list is a political and diplomatic instrument aligned with Canadian foreign and economic policy.

The health impacts are very real and serious. Refugee claimants from DCOs are ONLY eligible for what is referred to as the “public health and safety” coverage, i.e. health coverage only when the health problem is deemed to be a so-called “threat” to public health (i.e., transmissible diseases such as tuberculosis, STIs and HIV) or public safety (i.e., someone harboring homicidal thought … but not suicidal thought !). With these cuts, refugee claimants in general and refugees from DCOs in particular are viewed as threats and carriers of disease. This view is racist and denies people of their basic humanity.

The health impacts are very real and serious. Refugee claimants from DCOs are ONLY eligible for what is referred to as the “public health and safety” coverage, i.e. health coverage only when the health problem is deemed to be a so-called “threat” to public health (i.e., transmissible diseases such as tuberculosis, STIs and HIV) or public safety (i.e., someone harboring homicidal thought … but not suicidal thought!). Imposing a definition that removes migrants from the so-called “public” demonstrates the racism entrenched within the immigration system, whereby a flawed distinction is made between citizens and refugees. With these cuts, refugee claimants in general and refugees from DCOs in particular are viewed as threats and carriers of disease.

People are denied health care in situations such as: prenatal care, childbirth, medical emergencies, accidents, preventative care and treatment for chronic conditions such as diabetes, serious illness such as cancer, and in many more situations as well. Citizenship and Immigration Canada (CIC) should not only be held accountable for all the deaths, but also all situations of health injustice that stem from these cuts. Preventing access to health care services based on nationality is xenophobic and exclusionary.

In terms of the particular situation in Quebec, despite compensatory measures announced by the government, there is a lack of clarity around questions such as: Will the Quebec government “fill the gap” for refused refugee claimants and claimants from DCO countries? As it stands, there is a lot of confusion around this question and the statements that Quebec’s Health Minister has put out are not at all explicit on this issue. So far, on the ground, refugee claimants from DCOs are denied health care.

Although the Quebec government did state that they wanted to compensate for the cutbacks in health services for refugees, many of the announced measures are not being applied in practice. As for access to medications, the program that Quebec put in place subsequent to June 2012 seems to be more straightforward, in that it is at least enabling refugee claimants with valid IFHP documents to continue accessing essential medications. However, it does not address the issue of people who have lost full IFHP coverage following the cuts, or for people who are temporarily without a valid IFHP document because of delays in renewal, lost documents, etc. Currently, many people are being denied health care services (or some pay out of pocket – with great difficulty – for the services they seek). This is due to the confusion around IFHP cuts and supposed compensatory measures. Also, cuts to basic dental service, psychological services, eye care, and rehabilitation services (e.g. Speech and Language Pathology, and Occupational Therapy) that used to be provided under the IFHP are no longer provided. Quebec has not stepped in to cover these essential services.

It’s useful to keep in mind that the Quebec government used to issue provincial health cards to refugee claimants for a period of time in the 1980s and 1990s. This most likely had the double advantage of making health care more accessible and less complicated from a bureaucratic point of view. One could argue that the best step forward at this point for the Quebec government would simply be to issue a health card to all of those affected by the IFHP cuts. Moreover, we firmly believe that all persons living in Quebec should have access to the regular provincial health coverage program, regardless of immigration status.

The consequences of the cuts on the life and survival of refugee claimants are enormous and already palpable. Although research projects are being conducted to evaluate the impacts of these cuts, the reality is that they will probably only show the tip of the iceberg, and what we already know. In addition to very tangible physical health issues (cancer, fractures, etc. that would go untreated) and death, the impacts on mental health and the barriers being set to prevent migrants from having dignified lives are tremendous. These consequences underscore the importance of on-going mobilization to rescind the IFHP cuts and the broader struggle for access to health care for all.

In the context of this mobilization, it is paramount that we demand health care institutions to continue to provide health care to those who no longer have health coverage, including people who are denied the IFHP because of the cuts, as well as to offer care to uninsured communities in general. The request to document one’s immigration status in order to access services in health care institutions and community organisations needs to be challenged. Similarly, the provincial government should be pressured to denounce the cuts, and offer true compensatory health care. We have to continue to build momentum around access to health care, without limiting the mobilization to only professional health care providers. On this note, we invite individuals and organizations to participate in our “We refuse to cooperate” campaign (see address of the website at the beginning of the article).

The IFHP cuts are part of broader attacks against migrant communities and go hand in hand with the building of “Fortress North America” – where physical and virtual walls prevent free movement and access to essential services such as health care, but also food safety, decent work and housing and access to education. It is hard to dissociate the IFHP cuts from this broader trend, and it is also hard to dissociate these policies from the reasons that push people to migrate in the first place – wars, economic inequality, gender-based violence, environmental destruction, etc. These realities exist as a result of nation-states, like Canada, and their governments participating in and benefiting from a global capitalist system, and implementing imperialist foreign policy abroad. Health care access struggles need to look at how these issues are interconnected. Health, in a broad sense, is an intimate and fundamental aspect of peoples’ lives. Resistance against the IFHP cuts as well as broader resistance against unjust immigration policies, racism, colonialism, classism, ableism, hetero-patriarchy, environmental destruction, and other forms of oppression, constitute ways of building healthier relationships and communities over time.