Struggle against the deportation of Paola Ortiz : fragment from a collective history

Tuesday September 6, 2011. My first time at a Solidarity Across Borders meeting. The group is reviewing the recent requests for help it’s received. Among them is a request for accompaniment tomorrow. There isn’t much details in the message, just a meeting with David and his friend Paola, at “1010 St-Antoine”. At the time this address still means nothing to me. Can anybody join Jean-Luc for this meeting? I decide to volunteer. I’ve got some time, that’s why I came. 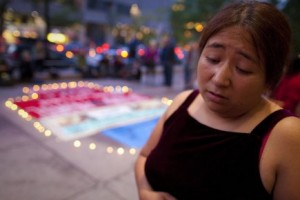 After all, my main reason for coming to Montréal at the end of the summer of 2011 was professional. I came for six months of research as part of my thesis in sociology (still in progress) at Université de Nanterre in France. Let me specify that my mode of “participant observation” as it’s called in the jargon, is quite particular: I anchor myself completely in the social reality that I aim to analyze. And my stance is clearly on the side of those who are engaged in struggle. (The reason I point this out is simply to help you place the narrator of this story.)

The next morning, I meet Jean-Luc in front of the Canada Border Services Agency Montréal office, 1010 Saint-Antoine. Paola and David arrive. We have a half hour to talk before Paola’s appointment. Paola is extremely anxious about meeting “her” agent, that is, the person responsible for ordering her deportation. Since Paola’s refugee request has been refused and all her legal recourses have been exhausted, she can be deported from the country at any time. But her very palpable stress is caused not just by the threat of imminent deportation but also by the personality of her agent, Liette Malenfant. Paola is terrified by her. This will be their third meeting. At the first, her PRRA (Pre-removal risk assessment) was rejected and she was detained. The second meeting was last week, also to organize the details of her deportation. “She just yells at me all the time. She’s horrible! I just can’t deal with her…” This time she’s expected to bring what was missing last week: her daughter’s passport. Paola’s four-year-old daughter and two-year-old son are Canadian citizens, both were born here. The problem is that she still hasn’t received the document, the passport office hasn’t processed it yet.

We enter the large impersonal building, submit to a bag search, explain the reason for our visit and find ourselves sitting in the waiting room. Our eyes follow the movements of other members of the crowd as their names are called and they disappear through the grey door. Finally Paola’s name is called. The four of us rise together, but as we approach the door the agent shocks us by refusing to let Paola’s companions join her for the meeting.

Another long wait, then finally Paola emerges, looking shaken. The agent speaks to us:

“I required the urgent passport service. She didn’t follow my instructions.” 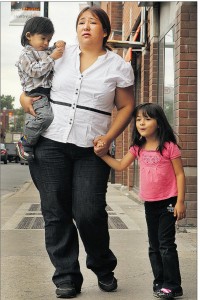 “But I did! I showed them the letter,” protests Paola.

“You didn’t! Otherwise it would have been ready by now.”

Paola is told to come back tomorrow with the proof of her expedited passport request, if not the passport itself. On that, the agent turns away and closes the heavy door behind her.

Paola is in tears, shivering and insisting, “But I showed the letter, I showed it…”, stunned by the violence contained in the agent’s disbelief of her words.

Once Paola has recovered, we get started with the tasks at hand: first submit the urgent passport request, then find a lawyer. We make a few telephone calls and secure an appointment with Stewart Istvanffy. When we arrive at his office we are happy to discover Stewart already knows Paola: he was the lawyer who helped get her out of the Laval detention centre a few weeks ago. He’s already familiar with the case and will go with her to see Malenfant tomorrow. But he’s not optimistic: in a few days, the passport will be ready, and nothing else will stand in the way of Paola’s expulsion and that of her two kids. Our only hope is to form a support committee, ask for assistance from everywhere possible, speak to the press and cross our fingers for a media mobilisation.

As it happens, Paola’s “file” can certainly elicit compassion. She survived abuse at the hands of her husband in Mexico — who was a cop and therefore all the more invulnerable — and fled to Canada. She now has two Canadian-born children. The younger child has been diagnosed with autism and the older has a speech impediment caused by partial deafness. In other words, both children require particular care that they can hardly expect to receive if the family goes to Mexico.

The media machine takes interest and the story takes off in the press (thanks in large part to the constant effort and travails of Paola, her friends and a handful of allies). In front of the TV cameras, Paola speaks her truth with dignity and composure, her truth that Immigration Canada “refuses to see, refuses to hear… Now that I am here, and that I can start to see hope for our future, they want to deport me. Why? My life, my home is here.” Paola speaks at press conferences and gives interviews. She is invited into newsrooms throughout the city, and gains support from all quarters.

Nevertheless, on Monday September 19 when the Federal Court hears the case, the judge upholds Immigration Canada’s decision, despite the overwhelming media support. Paola is crushed. Two weeks of physical and especially emotional exhaustion culminating in a crushing defeat. Tomorrow she’s expected at the airport…

Tuesday September 20, Trudeau Airport, 6:30 am. The cameras are waiting and Paola faces them bravely. Her children are not with her, they will stay in Canada. Everyone is crying. Paola turns to me and says, “Promise you won’t forget me, promise to keep talking to the media,” and I don’t succeed in holding back my own tears. But Paola doesn’t cry, not in front of the cameras. She is intent on speaking, not just for herself but on behalf of all the others who suffer the violence of our migration policies, “which see people as nothing more than pieces of paper to be cast aside.”

Paola ends up not leaving that day. The deportation is cancelled because Paola is not well enough to travel, physically overwhelmed by the stress. She is given a reprieve of three days, and the final night becomes an all-night vigil attended by all her supporters. Then on September 23, 2011 Paola is removed from Canada despite the ongoing media mobilisation in her support. That support does however make it a little easier for her to return to Canada somewhat sooner (only a little easier, because it nevertheless takes seven months of struggle, working at another pace but with an urgency motivated by the knowledge that each day that Paola spends apart from her children is one day too many). Paola seems to have reaped the dubious benefits of a high-level face-saving arrangement between the Canadian and Québec immigration authorities. But these callous calculations are of little interest to me, to us. What is interesting is everything that this spectacle attempts to hide.

I’ve related a small fragment of Paola’s life, the chapter of her life when our paths briefly joined. But my motivation for doing so is not the same as all those mainstream media who also recounted “Paola’s Story”. Because what they failed to say is that the treatment Paola faced is far from exceptional. It is not the result of an unfortunate turn of luck (“Poor you, your agent was Malenfant”). Nor is it simply a small misstep by an otherwise rational, human, equitable system that believes it should be “merciful” in the case of a survivor of abuse who has young Canadian-born children.

No, this story – and here I’ll put on my sociologist’s hat – is the direct result of systemic violence with very precise goals. A violence that flows directly from the colonial structure of nation-states with their long and continuous ideological frameworks, police apparatus, and techniques for managing and controlling populations. 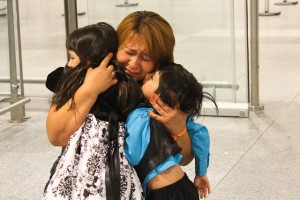 When we investigate the practice of deportation, we see that it serves two specific purposes that are closely interrelated. The first is a reaffirmation of the idea of border through spectacle and theatre. The physical area over which the nation-state claims to hold sovereignty is underscored by deporting people outside its borders, thus asserting territorial integrity. Whether in France, Canada, or elsewhere, the theatre of the border achieves the effect of demarcating us from them, and in so doing, reaffirms state sovereignty. Add to this the material aspect of this performance and the security economy it requires: construction of separation walls, detention centres, expulsion logistics, tracking technologies, militarized surveillance…

The second purpose is even more fundamental: deportation enables the economic exploitation of individuals. Not necessarily by carrying out the deportation of migrants but by constantly ensuring their deportability, since the threat of expulsion is enough to produce a disciplinary effect. Threatening a migrant with expulsion from the country is far more powerful than threatening to fire them. Unpaid overtime, withholding of wages, non-compliance with labour law, safety or health standards: the range of abuses is vast. Of course these offenses are endured not only by non-status migrant workers. But they are substantially magnified by the vulnerability of their status. (This same mechanism is employed with temporary workers who, though possessing legal status, remain under threat of expulsion and non-renewal of their contract the following year.) It is therefore no surprise that undocumented migrants consistently fill the ranks of the least desirable work sectors: the so-called 3Ds (dirty, difficult and dangerous; including construction, industrial cleaning, restaurant work, and so on) and the care professions (health care, domestic work, sex work, etc.). The logic at work here is as heartbreaking as it is banal: reduce the cost of labour in order to maximize profit.

So the main reason for telling Paola’s story is not to elicit compassion for her case, but rather what her experience reveals about the state’s illegalization of people for economic and political ends. About systemic violence masquerading as governmental efficiency with a veneer of rationality and humanism. I tell Paola’s story not to shed tears, but to remember the blood that’s been shed. To show what must be destroyed.