Testimony of a Deportee

Manuel Sanchez, member of Mexicans United for Regularization (MUR) and Action LGBTQ for Immigrants and Refugees (AGIR), was deported to Mexico on July 26, 2012, after spending months denouncing the Canadian government’s treatment of Mexican asylum seekers. He spent several long days in detention before his deportation because a few hours before the flight that would deport him to Mexico his lawyer had strongly recommended that he not go to the airport, believing that the Inter-American Court of Human Rights would intervene to prevent the Canadian government from deporting him. The incarceration was extremely traumatizing and humiliating for Manuel. Several people who had supported and comforted him during his incarceration at the Laval Immigration Detention Centre suggested that he write down his thoughts about his experience in detention. With the courage that he is known for, Manuel delved into his memories of that stressful period to raise public awareness about the harshness and violence of the criminalization that he experienced as a migrant. Below are some excerpts of his testimony.

…A few days later, following the advice of my lawyer, I went with him to the Canada Immigration office to explain to them why I hadn’t left the country by the specified date. I also showed them my new plane ticket that I had bought, as proof of my willingness to leave Canada. However, the agent assigned to my case informed me that there was an arrest order issued against me and I was placed in detention. From that moment, my world was transformed into one of fear and depression. I had never before in my life had any problem with the law. I had never before been detained for any reason. This was the worst experience I’d ever had in Montreal. 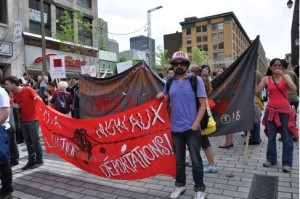 The agent brought me to another room, where three security guards were waiting for me. They confiscated everything I had with me, and then searched me to make sure that I had nothing with me other than my clothing. It was extremely traumatic for me to feel the hands of these agents on my body; they treated me as though I was the most violent and dangerous criminal in the world. I can’t describe how it made me feel. I asked them if, in addition to the search, they would put me in handcuffs and they said “yes.” I pleaded with them to not handcuff me. I told them that I wasn’t dangerous, that I’d come to the immigration office to prove to them that I didn’t want to break the law. The agent responded that he was obliged to handcuff me, that it was part of their security protocol. He asked me to hold out my hands so that he could put on the handcuffs. I wouldn’t wish that experience on anyone. The feeling of the cold metal linking my wrists… My legs trembled and my eyes filled, but I closed them before my tears could escape. The agents transferred me to another room, filled with hopelessness and despair, where four other migrant men waited in silence.

A few hours later, we were transferred to the Laval Immigration Detention Centre. In the van, I was again overcome with sadness when I saw the world outside from the barred cage of the van. I felt like the most dangerous animal in the world, my head filled with an ocean of unanswered questions. I could see people on the street outside watching the van pass by. I saw their faces; they were wondering what the van could possibly contain. And I was wondering why I was being put through all this when the only offence that I had committed was to have requested protection from this country. I remembered all the effort and the sacrifices I gone through to come to Montreal, without speaking a word of French, without knowing a soul, and having to adapt to a completely different world. I had tried to work, to be a productive person, to pay taxes and show the Canadian government that I was someone who was motivated to excel. I forced myself to learn the language and I made several friends who helped me feel at home. The four years that I lived in Montreal were the best years of my life. I was allowed to live as a gay man, happy and without having to fear for my safety, without having to hide my homosexuality. But it only made my frustration greater when I realized that all my efforts and sacrifices were worth nothing in the eyes of the Canadian immigration services. 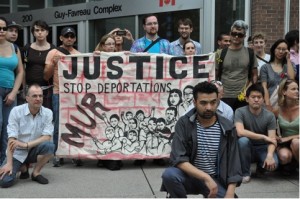 When I arrived at the detention centre in Laval, I had to face a world that completely shocked me. I was deeply moved as I walked through, meeting the eyes of the detained migrants who were filled with hopelessness and despair. These are people who, like me, had left their country to find a better life. And there we were, together, breathing sadness, solitude and despair into our lungs. I was devastated by everything that was happening. I had no one to share my pain with. I didn’t sleep that first night, submerged as I was in an ocean of sadness and frustration. I lay there, surrounded by men from countries that I didn’t know. The next day, after breakfast, I went back to my room; I wasn’t in the mood to socialize. The sun was coming through the window, and looking at the building across the street, I could see children playing in a small yard surrounded by barbed wire and security walls, guarded by security officers. At that moment, I could no longer hold back my tears, imagining these children in the same conditions as me… I was overwhelmed with an indescribable sorrow. All of a sudden, I felt a hand touch my shoulder. Turning, I saw that it was a man from my dormitory. He was from Indonesia. He said that it was the price that we, the undocumented, had to pay. I asked him if the children were also in detention, and he said that yes, they were part of an entire family that had been placed in detention. I couldn’t stop wondering, “How, my God, can we let children experience such suffering?” And I wondered why no one had done anything to protect these children from such experiences.

I am currently living in anonymity my own country, hiding to avoid being assaulted or killed. Day after day, I live in fear and uncertainty. I regret having left Canada. I sometimes think that it would be better to live there with no status. However, because I can’t turn back time, I try to live from day to day. I thank all the people and the groups that supported me during the difficult process that was my experience of being an asylum-seeker in Canada.