This is a brief look at a few of the individuals and families that have publicly struggled against the immigration system in the Montreal-area this past year.

Of course, these are only a few among the thousands of struggles that take place daily, and more often invisibly, against the injustices of the immigration system.

– Pavon-Aguila family in Saint-Hyacinthe is threatened with deportation in January 2013, left for Mexico mid-February.

The struggle of the Pavon-Aguila family unfolded at a time of escalating attacks on immigrants and refugees. On December 15th, the Canadian government implemented Bill C-31, which establishes a racist, two-tiered refugee determination system that fast-tracks claims and restricts access to recourse on the basis of a claimant’s country of origin. It is widely expected that this legislation will mean that a growing number of migrants will find themselves facing deportation. At present, it is estimated that 15,000 people have been deported since 2008- among them, an average of seven Mexicans every day.

Letitia Aguila, Esteban Pavon and their two daughters, Fernanda and Stephanie, first arrived in Canada on January 22, 2009. Having fled repeated instances of violence and extortion at the hands of armed gangs, the Pavon-Aguila family filed a refugee claim, which was subsequently rejected on December 21, 2012. At this time, Immigration and Refugee Board commissionner Michel Jodoin argued that the family faced little more than the “general degree of risk” experienced by all Mexicans, concluding that the gang members who terrorized them would no longer remember them by this point. However, the family remained uncertain that they would be so easily forgotten, and fears for their safety should they return.

Their community in Saint-Hyacinthe came out in hundreds to support the Pavon-Aguila family and demand that their deportation be stayed.

In mid-February 2013 the family decided to leave for Mexico, prior to a meeting with the Canada Borders Services Agency, with the hopes of returning to Saint-Hyacinthe. 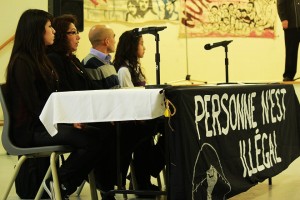 Sami came to Montreal in 2000, at the age of 12, with his parents and two sisters. They were fleeing political repression in Pakistan, and were accepted as refugees in Canada. In 2007 the family was denounced to Immigration Canada by their daughter’s abusive partner, based on details that they omitted in their initial refugee claim at the advice of an immigration consultant. Sabir Mohammed and Seema Sheikh were deported to the United States in 2009. They are now in the process of securing permanent residency there.

Sami’s file, as well as his two sisters’ .., were sent back to be reconsidered by immigration Canada. Years later, in 2012, Sami was informed that his refugee application had been rejected and he would face deportation to Pakistan, a country he had never lived in.

Sami initiated a public campaign, with the support of folks in his neighbourhood of Parc-Extension, members of Solidarity Across Borders, and his lawyer. In January of 2013 the decision was finally overturned. Sami was granted permanent residency on humanitarian grounds. “I didn’t know what would happen and when it would happen,” Sami said. “Now I can actually make future plans over here.”

In Parc-Extension, a neighbourhood with one of the highest rates of poverty and concentration of migrants in the city, Sami is one among hundreds of individuals and families who struggle against the immigration regime on a daily basis. 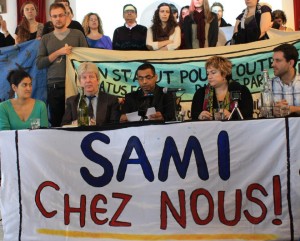 – Gohtra-Singh family recieved a stay of deportation, other decisions still pending, in January 2013

After struggling through the bureaucracy of the Canadian immigration and refugee system for more than 10 years, the Gohtra-Singh family was informed that they would be facing deportation to India in January 2013, a country where they have practically no ties.

Ms. Reetu Gohtra and her husband Mr. Shimbi Singh live in the Montreal neighbourhood of Parc-Extension with their two children Kamal and Pardeep, who were born in Montreal and attend school here. (Eleven year old Kamal attends a school for children with special needs.)

On January 15th, the family was granted a stay of deportation.

They continue to struggle within the immigration system, and despite the extremely stressful circumstances they prioritize keeping a stable life for their kids.

– Reyes-Mendez family was deported to Mexico in December 2012

Corruption and violence in Mexico has resulted in at least 60 000 deaths in the last 6 years. This situation has been ignored by the Canadian government, which continues to deport Mexicans at a rate of 7 per day.

Despite the danger they face of being captured by corrupt Mexican police, kidnapped and murdered, the Reyes-Mendez family faced deportation to Mexico in January 2013.

After community mobilization and support initiated by the family, with Mexicans United for Regularization (MUR), the family was deported on January 19th 2013.

By denying refugee status to the Reyes-Méndez family (and thousands of others who come to Canada for similar reasons), the Harper government puts this family and others at great risk. Past applicants were murdered after seeing their application refused and being forced to return to Mexico. It is known that previous applicants are more at risk of abduction and extortion by criminal gangs.

With sadness and anger, the struggle continues.