Because the free trade agreement between Canada, the US, and Mexico (NAFTA) allows for transnational companies from all three countries, and members of their political and economic elite, to negotiate freely and eliminate trade barriers, while stopping the movements of humans across borders. These are the disastrous consequences of the NAFTA accord.

Because we observe and condemn acts of extreme violence perpetrated by the Mexican state against its own citizens, and criticize its lack of capacity to deal with security issues.

Because it is absurd to think that the neoliberal strategies targeted against certain communities, and lead to their misery and exploitation, will not be resisted through popular struggle and organization.

We respond as a “community” because we have been directly attacked, both by states and those who govern them. However, coming together and organizing as a community does not mean that we are a closed group. On the contrary, through our migrations, we have learned that all resistance struggles are connected. Our common goal is to find alternative modes of organization than those used by the structures of capitalism: oppression and exploitation through use of force and violence. We defend our legitimate right to assemble and meet with those who share both the same nationality as us, as well as those who share common ideas.

We are Mexicanxs and unidxs, because we believe that all along our journey we have found it important to join forces with comrades, regardless of their nationality, but without forgetting our identity, and where we are from.

Our first reaction would be to say that there is no other way of resisting or struggling against unjust politics of which we have been victims. However, thinking that a common nationality or migration experience makes us united in struggle and mind is naïve and fatalistic. The Mexican community in Canada, more specifically the one in Montreal, immigrated with all the flaws and class divisions that existed in Mexico.

MUR is barely representative of the Mexican community of Montreal. It is a small portion of the Mexican immigrant population that decided to organize against divisions of class, migration status, language, and nationality, and talk about those who are more disadvantaged, and more vulnerable to exploitation: those who have a precarious immigration status—one that vacillates between existence and clandestineness—and actively participate in the struggle to make a more just, egalitarian society.

A sense of unity within MUR (Mexican@s Unid@s por la Régularizacion) did not come easily. Like in all other struggles for social justice, it was difficult to agree on principles and objectives. Strategies change as we go along, according to who is involved. Communication, organization, popular education, and collective interests often clash against the goals of individuals. These are challenges that we have met as a group, and which threaten our unity.

Furthermore, there are the inconveniences of our judicial situation: precarious employment, lack of security, little resources, and little energy to meet for a few hours to organize—just to name a few. Sometimes, we feel like the only things we have in common are the Spanish language and the conviction that it is only through investment of time and human capital that we can affect deep change at both individual and collective levels.

We have succeeded in establishing our fundamental principles and defining our political mandate so as to open our struggle to groups and allies that support our politics and ideas. The MUR reaches out to those who support the fact that migration is a natural human phenomenon, and that we should be free to move as we please. Thus, we are united with those who are angry and tired of the cruelty of the system and denounce deportations, double punishment, and detention centres. We demand answers, as well as the names of those who are responsible, dates and times, agreements, and profound changes to both bureaucracy and to the existing, inhumane deportation laws. 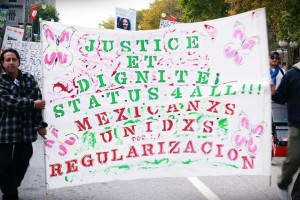 Because we cannot hope for a more just and egalitarian society if there are still millions of people that do not have access to essential services. Thousands of people live and work in some of the most dangerous and precarious conditions, with some of the worst schedules and salaries, without employment insurance, vacation, maternity leave, and, in the event of an accident or health emergency, without access to hospitals, because identification could mean being deported.

We demand an open and complete program of regularization for all those who live in Canada, including of course all Mexicans. Canada has launched regularization programs in the past for certain communities, and it could do it again if it had the will to do so. However, these were exclusive programs, known once again to respond to demands of labour and capital. These programs did not include rights, or any processes of accountability for harms caused.

A regularization program that would be open and all-encompassing for all people living in secrecy and precarity, and for all those who are anxious and fearful of the future: this would be the minimum payment for the debt that we owe to the millions of people who have worked for years, and still work, in our fields, who take care of our kids and our elderly populations, who make our clothes, deliver pizza to our houses, cook for us in restaurants, drive us home in their taxis, and clean our offices… These people have been living for years in secret, without taking full part in our society, kept form the freedom of living without fear—thousands of people and families without whom the Canadian economy would fail.