When? Tuesday, October 2nd: leaveMontrealat 7:30am, arrive inOttawaat approximately 10:00am.

Where? A bus will leave from 1455 Boul. De Maisonneuve West (ConcordiaUniversity) at 7:30am. Suggested contribution of 5-10$, but no one will be refused.

Why? Because SEVEN Mexicans are deported fromCanadaevery day, and are faced with conditions of extreme violence upon their return.

On October 2nd, we, the members of MUR, will travel to Ottawawith the goal of submitting a petition that demands that our members gain access to a regularization program leading to permanent residence. We also demand thatMexiconot be designated a “safe country.” We will demonstrate in front of Parliament and will have a press conference in the late morning. MUR is a group of Mexican women and men who live in Quebecand who are waiting for a response to their claims for asylum; some members claims have already been rejected.

While MURis fighting for the regularization of Mexicans in particular, we act in solidarity with all struggles for migrant justice, here and abroad. We envision a world without borders, where all human beings are free to move as they choose. We envision the erasure of the difference in status between “citizen” and “foreigner”, and the inequalities that are associated with this difference.

In July of 2009,Canadaimposed visa restrictions on Mexicans wishing to travel toCanada.Canada’s Minister of Immigration, Jason Kenney, justified this decision by claiming that Mexicans were “false” refugees who abuse the Canadian refugee system. For several years, a significant number of Mexicans have sought asylum inCanada, because of the very difficult conditions that have developed in their country. The refugee claims of the majority of these Mexicans are rejected, and these people are deported to their country of origin. Furthermore, the Canadian government is about to unveil, under the auspices of its reform to the refugee protection system (which is clearly anti-refugee), a list of so-called “safe” countries. Refugee claimants from these “safe” countries will see their claims process put on the fast track, and they will not have the right to an appeals process in the event of the rejection of their claim.Mexicowill very probably be one of those “safe” countries, which, according to the Conservative government, are liberal democracies that are “not habitual producers of refugees,” “that respect human rights” and that “offer state protection” to their citizens.

This description of the Mexican situation is completely disconnected from reality, and will appear grossly hypocritical to anyone who has even vaguely followed current events in that country over the last several years. Indeed, the Global Peace Index, an instrument developed by an international panel of experts that classes countries according to their levels of violence, ranks Mexico 135th out of a total of 153 countries, which indicates that Mexico experiences more violence than countries such as Congo and Rwanda.

In December of 2006, the Mexican government declared a “war on narco-traffickers” by deploying the army throughout the country, despite the army’s history of human rights violations and impunity. Instead of diminishing violence associated with organized crime, the security forces themselves systematically committed assassinations, torture, rape and other abuses against the population of Mexico. The Mexican people experience this violence in addition to the numerous civilian deaths that occur in the crossfire between drug cartels and state security forces, as well as the terror that they experience at the hands of members of organized crime, who are increasingly targeting the civilian population. This is expressed in the form of extortion, kidnapping, forced recruitment and the assassination of anyone who does not recognize the authority of criminal organizations. Executions, massacres, bombings, and the discovery of decapitated bodies that have been tortured and left for public view are now part of daily life in Mexico. In five years, this murderous war has produced nearly 100 000 deaths (of which 1400 were children), between 10 000 and 20 000 disappearances, and 230 000 displaced people. Last August, the newspaper Le Monde described the situation that prevailed in Mexico: “This veritable slaughter constitutes by far the most murderous conflict on the planet over the last several years.[1]”

Unfortunately, the violence associated with narcotrafficking militarization is not the only phenomenon that forced us to leave our country. There are others, including:

The Canadian government affirms that the Mexican state is capable of protecting its citizens. However, corruption and the infiltration of criminals into every level of government and security forces clearly render this impossible. The two women who were refused asylum inCanadaand who were assassinated shortly after their deportation toMexicodemonstrate the lie behindCanada’s allegations thatMexicois a safe country.

Because of the irresponsibility of the Canadian government and its refusal to recognize the extreme violence that has engulfed, and continues to engulf,Mexico, and because of the Mexican state’s total incapacity to protect its citizens, thousands of us fear for our lives if we are forced to return to our country of origin. Thus, we have been forced to remain, or will be forced to remain inCanadawithout legal status. This condemns us to a situation of extreme vulnerability. People without papers are the most exploited on the job market and are among the most vulnerable members of society as a whole. They are deprived of fundamental rights that other citizens enjoy, and live in a general state of fear, anxiety and isolation.

The Canadian government alleges that we are “false refugees,” that we abuse of the generosity ofCanada. This statement and the sentiment it represents is dishonest and hypocritical. This is not a question of generosity, but one of responsibility on the part of the Canadian government to accommodate Mexican refugees, given that imperialist neoliberal policies directly implicateCanadain the profusion of misery, criminality and violence; of forced displacements; of the social disintegration thatMexicofaces today. The Canadian government declares thatMexicois a democratic country, but neoliberal policies and economic greed have caused a return to authoritarianism and human rights violations for the majority of the Mexican population. 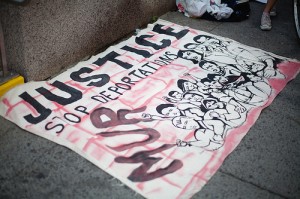