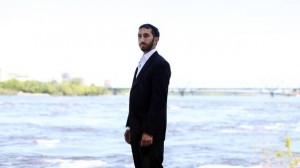 Join us in denouncing the double punishment of Deepan Budlakoti, who was born in Ottawa and is facing deportation to India.

Deepan is a Canadian and a member of our community, and we stand with him as he fights to remain with his family, friends and community in Ottawa and to uphold his full dignity. We reject the unjust and racist policies that seek to dehumanize and throw him out of our community and the country. We demand that Deepan be immediately released from the conditions imposed on him and that his citizenship be restored to him without delay.

Read the full statement in support of Deepan and against double punishment here.

I was born in Canada at Grace Hospital in Ottawa, which is now closed.

My parents did not work for the Indian Embassy when I was born. They worked for a doctor who stated under oath in court that they worked for him at that time but the Canadian government refuses to accept this and other evidence we gave them to prove this.

What the government is doing is wrong. How can they give me a passport which says that I am a Canadian citizen and then take it away saying that they gave it to me in error? I have always believed and still believe that I am a Canadian. I was born here. I had every document a Canadian would have.

I am suffering double, if not triple, punishment. I already completed three years in jail because of criminal convictions. Now I face deportation for the very same convictions. And for the last six months, I have been in immigration detention and living under strict conditions on bail. This could go on for years since at this time I have no status and no nationality anywhere.

Because at the same time, the Indian government has said that they will not issue any travel documents for me. Immigration law in India states that if a person is born to Indian parents outside of the country and the parents want their kid to be citizens, they need to apply within two years of their birth. This
was not done and I am not a citizen of India.

So now i fall outside the UN Universal Declaration of Human Rights which states that a person must have a nationality.

I don’t want to live for years on immigration bail conditions. It is very hard to live under a 9am to 9pm curfew and follow all the other conditions, such as going to sign in every two weeks between 9 am to 11:30 am, on top of my parole conditions. In addition, I am not allowed to work: I am waiting for a work permit to be issued or denied – if it is denied, I won’t be able to work at all.

I do not have anyone in India. All my relatives have passed away since my parents only had a small family.

It is important to support my case: if the government can take away my citizenship, it can take it away from others as well. Also, the government is punishing me for its mistakes and refusing to take ownership for these mistakes. Government officials are violating my constitutional rights and violating
UN principles. These are things that should concern all of us.

At the end of the day, all I am asking for is to get back my citizenship and to be allowed to live a normal life.

For more information about Deepan and his support campaign, click here!