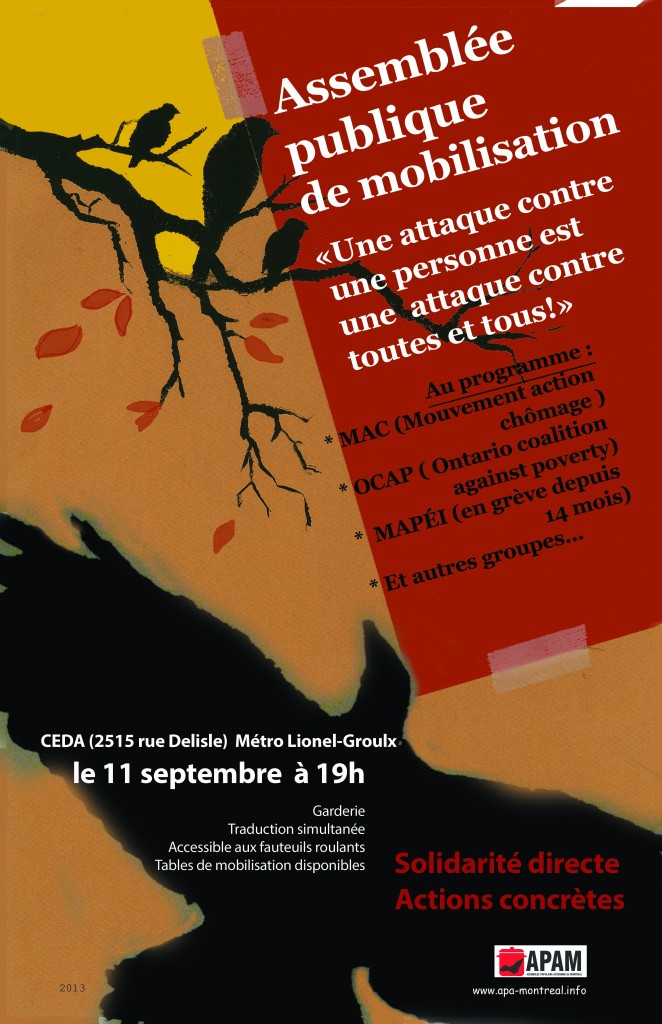 [This public assembly is endorsed by Solidarity Across Borders; a member of the Collectif éducation sans frontières will be part of the main panel.]

We’re all subjected to attacks by the capitalist system. We suffer them as workers, when we’re unemployed, as migrants, as tenants and when we’re homeless. If the specific hardships we face are sometimes different, the cause of our misery is the same and it profits to the same group. The market runs on our impoverishment. Because of the deep rooted attacks on our living conditions we can only oppose direct solidarity and concrete action. It’s out of the question to let politicians frame false solutions, cleanse and conceal our poverty behind social assistance measures that are insufficant, condescending and for those of us in a more precarious position, totally unavailable, It’s also out of the question to allow anyone to take charge of our struggles.

Under the theme “An injury to one is an injury to all!”, a public assembly will be held on Wednesday, September 11th at 7pm at CEDA (2515 rue Delisle, Lionel-Groulx metro).

This will give you an opportunity to be informed on the ongoing struggles, especially the strike at the MAPEI factory that is now over 1 year old, the closing of 400 beds at Seaton House, an emergency shelter in downtown Toronto, mobilizations against cuts to unemployment and for free access to public schools for undocumented children without status The presentations, then the open microphone will follow, those will focus on information and mobilization. A meeting of converging struggles to pool our ressources between the different groups or persons mobilized and facing those attacks.

← Stop the deportation of Djaber Kalibi!
Public Statement: No Border Agents in our Hospitals and Clinics / Heath Care For All! →