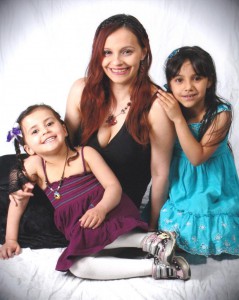 UPDATE: SHEILA RECEIVED A STAY OF DEPORTATION FOR TWO YEARS! HOPEFULLY HER STATUS WILL BE REGULARIZED LONG BEFORE THE TWO YEARS IS UP.

Mother scheduled to be deported without her children on 30 August

Sheila is a 27-year old mother of two girls, ages 8 and 5, who has lived in Montreal since 2005. She is scheduled to be deported to Mexico on August 30th, her younger daughter’s 6th birthday. An administrative stay request has already been refused; the Federal Court will hear her case on August 26th.

Sheila would not be able to bring her children with her if she is deported because of an ongoing custody case with the children’s father. Moreover, having recently suffered an accident that leaves her partially crippled, having exhausted all her resources in fighting her immigration battle, and having absolutely no network of support in Mexico, she would be unable to ensure even her children’s basic security in that country, let alone provide the extra support they would need in a new country where they don’t speak the language, and the professional support her oldest daughter, who has a severe speech delay, requires. Deportation would mean that the two girls would be separated from their mother for many years; it would separate Sheila from her partner, from her network of friends, and from other family, including her father. It would uproot her from her home.

Sheila originally fled to Canada to escape a series of traumatic experiences in Mexico related to a violent ex-boyfriend. Sheila fears returning to the violence and turmoil of Mexico. Although Canada pretends that Mexico is a safe country, in fact it has one of the highest homicide rates in the world and organized crime often works hand-in-hand with police. Moreover, Sheila has few remaining ties to Mexico. Deportation will send her alone, without resources, to a situation of insecurity and instability. On top of all the other difficulties she would face in this situation, Sheila requires immediate attention for precancerous cells that have been discovered on her uterous; treatment which she would not be able to arrange in Mexico with any certainty or with the necessary urgency.

Sheila’s struggle to get permanent status in Canada has been extremely difficult. A sponsorship application for Sheila was accepted by the Federal Government and Quebec in 2008. However, before the process was completed, her sponsor committed an act of violence towards Sheila’s youngest child, a crime for which he was later convicted. This ended the sponsorship. However, as a protected person, the sponsor remained in Canada despite the criminal record, and Immigration Canada informed Sheila that she could remain as well because she remained in the same file. But, in the spring of 2014, Immigration Canada abruptly informed Sheila that she had no status and had to leave Canada.

With the help of her lawyer, Sheila now has a pending spousal sponsorship from her partner Michael-John Carrière, as well as applications for Temporary Residence and for Permanent Residence on Humanitarian and Compassionate grounds. The Federal government is insisting on deporting Sheila before she receives an answer on any of her applications. It is insisting on deporting her even before the custody of her children is settled.

It’s time we END the violence of deportation! Status for All! No one is illegal!

PLEASE ACT AND SPEAK OUT

–> Forward this message to your friends and networks.

–> Call and write the Federal Minister of Immigration Chris Alexander. Tell him you support Sheila and that he should respond to Sheila’s immigration applications immediately, and before August 30th.

–> Call and write the Federal Minister of Public Safety Steven Blaney. Tell him you support Sheila and that he should stay Sheila’s deportation until there is a response on the immigration applications and the custody of the children is settled.

–> Call and write Quebec Minister of Immigration Kathleen Weil. Tell her you support Sheila and ask her to intervene personally to figure out a solution so that Sheila can stay with her children in their home in Montreal.

–> Sheila and her partner Mike have spent all their resources on legal fees. Please support them financially by responding to their financial appeal: https://fundrazr.com/campaigns/blNb5/tw/33MScc