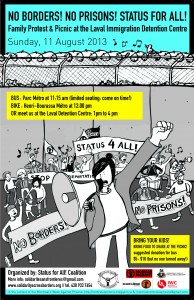 No Borders, No Prisons! Status for All!

Rally and picnic at the Laval Immigration Detention Centre

BUS: Parc Metro at 11:15am (limited seating so come on time!

Bring your kids! Bring food to share at the picnic!

Join us on Sunday August 11th for a family-friendly rally and picnic in front of the Laval Immigration Holding Centre to denounce the unjust and racist detention of immigrants and refugees.

We will be meeting at 11:15am at Parc metro station to bus up to the detention centre, bringing speakers, music, and messages of solidarity to those locked inside. We invite friends and family of those detained, and all those who oppose the racist violence of detention to join us for a rally and picnic outside the Laval detention centre.

Because more than 16,500 people were deported last year and an average of 400 to 500 people are detained on any given day in Canada for making the courageous choice to migrate.

Because countless individuals and families, including children, have been torn from our communities and locked up in detention centres under conditions that are fundamentally inhumane and degrading, and with new legislation the numbers will only increase. From 2006-2011, more than 83,000 migrants were detained by Immigration Canada, with an additional 13,000 since 2011 alone. Immigrants can be detained for indefinite periods of time, with no idea when they will be released.

Because the prison system and the immigration system are deeply connected. The expansion and privatization of both state prisons and immigration detention centres reflects the interests of capitalism, colonialism, and state-sanctioned white supremacy. People of colour are disproportionately incarcerated. Black people are four times more likely, and Indigenous people are nine times more likely than white people to end up in a federal penitentiary.

Because with the privatization of detention, private companies like Corbeil Management, BD Hamilton, Garda Security (who run the Laval detention centre), and others are reaping millions of dollars from the criminalization of migration.

Because racial profiling is endemic in Montreal, with communities of colour and migrant communities over-policed and criminalized. The targeting of these communities not only forces a disproportionate number of people of colour into the criminal justice system and prisons, but also into deportation proceedings if they do not have full Canadian citizenship.

Because resistance to detention and to the violence of the immigration system continues.

NO BORDERS, NO PRISONS! SHUT DOWN THE DETENTION CENTRES! STATUS FOR ALL!

This event is organized by the Status for All! Coalition (The Immigrant Workers’ Centre, Dignidad Migrante, Mexicans United for Regularization, No One Is Illegal Montreal, and Solidarity Across Borders)

This event is taking place within the Week Against Prisons. More info: //contrelesprisons.blogspot.ca

To add your organisation to the list of groups endorsing, email solidaritesansfrontieres@gmail.com