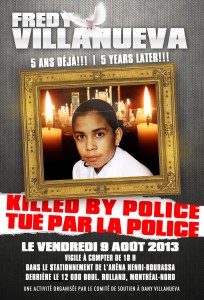 It has been almost five years since the shooting death of 18 year old Fredy Villanueva in the parking lot of Montreal North’s Henri-Bourassa Arena, at the hands of Jean-Loup Lapointe of the Montreal Police.

For five long years we have waited for the outcome of an expensive and drawn out coroner’s inquest into the causes and circumstance surrounding Fredy Villanueva’s death.

And while we patiently await the outcome, the SPVM chooses to promote Lapointe to the SWAT team!

And while an assassin in uniform enjoys his promotion, the Villanueva family is left overwhelmed by the threat of deportation of their only living son, Fredy’s brother!

We do not have to accept one injustice after another while truth and justice still hang in the balance!

Join us for a vigil in solidarity with the Villanueva family!

← TWICE REMOVED: Double Punishment and Racial Profiling in Canada
(August 11) No Borders, No Prisons! Status for All! Rally & Picnic at the Laval Immigration Detention Centre →