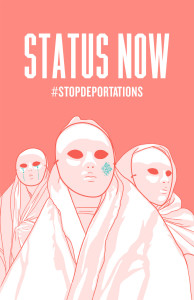 Hear stories from migrants directly affected by the violence of CBSA and Canada’s immigration system. Check out the SSF Youtube page for video testimonies and stories  ‪#‎StopDeportations‬

12:28pm: Two violent arrests by the cops at the support rally at 1010 St. Antoine, outside of the occupation of the Montreal CBSA offices. #StopDeportations #ShutDownCBSA #NoJusticeNoPeace

12:24pm: Riot cops with shields and helmets have kettled about 20 Solidarity Across Borders organizers and allies in occupied ‪#‎Montreal ‬ ‪#‎CBSA‬ office and are picking them out for arrest, but their spirits are high and defiant and they continue to stand in solidarity with non-status folks. ‪#‎StopDeportations‬‪#‎ShutDownCBSA‬

View the livestream from inside the occupation at: www.ustream.tv/channel/cutvlive

How you can support:
1) If you’re in the Montreal-area, join the outside support demonstration that is taking place throughout the occupation. Gather at 1010 St-Antoine West (métro Bonaventure, between Peel and de la Cathéderale)
2) Spread the word about the occupation by sharing updates, photos and videos.
3) Send a statement of support on behalf of your organization to: solidaritesansfrontieres@gmail.com

MONTREAL, May 3, 2016, 9am – More than twenty-five Solidarity Across Borders members and allies are currently undertaking an unlimited occupation and disruption of Canada Border Services Agency (CBSA) offices in downtown Montreal at 1010 St-Antoine West, a site of daily anguish, fear and anxiety for hundreds of Montreal-area migrants.

Solidarity Across Borders members are demanding an immediate, inclusive and ongoing regularization of all undocumented persons living in Canada, as well as denouncing the daily violence of the CBSA. The protesters assert that the agents and employees of the CBSA are complicit in detentions, the separation of families, driving people underground, creating fear and anxiety, and in some cases, the death of migrants in custody.

More generally, the demonstrators reject the legitimacy of the CBSA and borders, and re-assert that all human beings have the “freedom to move, the freedom to stay and the freedom to return.”

There are tens of thousands of undocumented migrants in the Montreal-area, with at least 500,000 in all of Canada. The CBSA plays a direct role in keeping these individuals and families precarious and isolated. Thousands of migrants are deported yearly, while hundreds more are detained at prisons. Since 2000, at least 14 migrants have died in CBSA custody.

The slogans “Status Now” and “Arrêtons les violences” have been placed on the exterior windows of the building. Inside, protesters have redecorated the interior lobby with silhouettes representing individuals and families deported in the past 15 years due to the actions of officials at the CBSA in Montreal.

The protesters succeeded in occupying the offices, despite locked doors and security. Today’s occupation builds on ongoing organizing efforts against deportations and detentions in the past decade, including support work, protests, pickets, petitions and more.

For more detailed background to the reasons for today’s protest, consult the demands of Solidarity Across Borders: www.solidarityacrossborders.org/en/a-propos/revendications