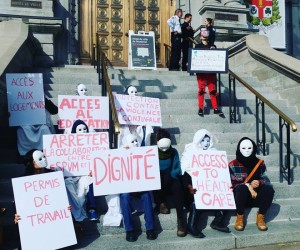 Rally with the Non-Status Women’s Collective

You are invited to participate in an action in front of City Hall to demand a real sanctuary city from Mayor Denis Coderre. In January 2017, he declared that Montreal was a sanctuary city, but it was not true.

And non-status people are still being arrested because of their immigration status and turned over to the CBSA by the SPVM (which reports directly to Coderre!), imprisonned and deported.

Join us in the struggle for a life of dignity.

We are counting on you to be there.