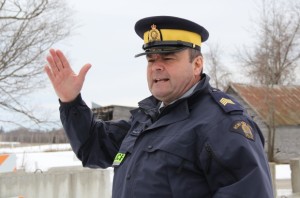 Roxham Road, 7 November 2017 – Observers at the Roxham Road informal border crossing are reporting that RCMP officers are becoming increasingly aggressive towards people intending to cross into Canada, to the point that some migrants have turned back. Some RCMP officers have also been misinforming refugees, telling them to apply at a regular border post. People who follow their advice will be turned back to the United States and banned for life from applying as refugees in Canada.

“It is outrageous that RCMP officers are not only using their authority to intimidate people who are seeking safety in Canada but actually misinforming them in ways that can have an enormously negative impact on their lives. Migrants who listen to them and apply at a regular border post will throw away their only chance to apply as refugees in Canada, which in many situations may be the only opportunity they have to get permanent status in a safe place!” said Amy Darwish, a spokesperson for Solidarity Across Borders.

Under the Safe Third Country Agreement, with a few exceptions, people who attempt to apply as a refugee at a regular post on the US-Canadian border will be refused. They will then be deemed to have applied as a refugee in Canada, and can never apply again. If they subsequently cross irregularly, they can be deported very rapidly to their countries of birth or left with no other choice but to join the ranks of Canada’s heavily-exploited undocumented class.

“We have heard from observers on the American side that RCMP officers are making people reconsider crossing by saying things like ‘this is a bad way to try to begin your life in a new country’ while, in almost all cases, it is the ONLY way of beginning their lives in a new country.” added Darwish. “Last week, one officer told them to get back in the taxi, saying that if they crossed they would be sent back to their birth countries tomorrow – which is false.”

“It seems clear that there has been a policy shift since the summer. We would like to know if the RCMP has taken it upon itself to attempt to circumvent international refugee law in this way or whether this a policy of the Trudeau government.” said Noé Arteaga, Solidarity Across Borders spokesperson.

According to Canadian government figures, there were more than 10,000 refugee claims by people crossing irregularly between mid-March and end of September. The government is processing these claims one by one rather than considering a global regularization programme, with the result that only around 5% have had their claims heard and the majority live in precarity with little access to services they may require.

—-
Solidarity Across Borders
Background: Crossing to Canada from the United States

← ”Coderre, Coderre, so where’s your sanctuary city??!!”
Colonial & Racist John A. Macdonald Monument defaced in Montreal (with video and photos) →