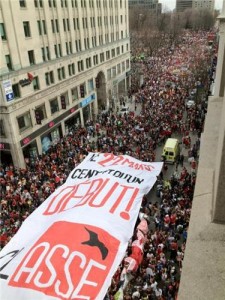 WE SUPPORT THE CAMPAIGN OF ECONOMIC DISRUPTION

March 26, 2012, Montreal — This week, Quebec students escalate their tactics, building on almost one month of a general strike, and last Thursday’s massive demonstration against the Charest government tuition hikes.

The ongoing strike and Thursday’s historic demonstration are a starting point, not an end, as many student organizers have pointed out. The upcoming week of disruptive actions is especially important.

We are writing to support the Coalition Large de l’Association pour une Solidarité Syndicale Étudiante (CLASSE) who have called for a campaign of economic disruption to pressure the Charest government to cancel the tuition hikes. We agree that it’s not just through symbolic protests and actions – which are important to build solidarity and support – that the Charest government will capitulate. Rather, they will respond to the sustained and tangible disruption of the Quebec economy.

Already, business organizations, politicians, police and mainstream media commentators have referred to the economic impacts of the general strike. More blocked bridges, ports, highways and government buildings, as well as the continued disruption of colleges and universities, will force the hand of the Charest government.

Beyond the immediate demands to cancel the tuition hikes, sustained economic disruption opens up political space to talk about broader social demands. In addition to demands for free access to education (“gratuité scolaire”), some student associations have made broader links, by opposing Plan Nord or taking a stand in favor of full access to schools for non-status persons. Sustained strikes and disruptions opens up democratic spaces in the streets and in our communities for larger demands to confront capitalism, patriarchy and all forms of exploitation and oppression. A social strike puts democracy into the hands of people and their grassroots assemblies and institutions, not the sellout politicians and parties loyal to “representative democracy”.

We are writing, as local grassroots social justice collectives, groups and organizations, to publicly support this week’s economic disruptions. We will encourage our members to lend tangible support, by participating, and by engaging others in support of this week’s escalation. We denounce the use of police to attack students who are using legitimate tactics to force the hand of a government that refuses to listen to popular power. We also express our solidarity with blockaders and resisters on the frontlines, and denounce all attempts to use the media or police to divide movements.

–> To endorse this callout, please contact blocampmontreal@gmail.com . The callout will be re-sent this Thursday morning. <–
[By signing this callout, we will share information actively via our networks (public contact lists, public events, e-mail announcements, website, social media etc.) and publicly support students and their supporters who are organizing economic disruptions this week and beyond. We also support the CLASSE in opposing all tuition hikes, within the perspective of free access to education.]