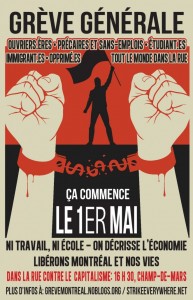 NO BOSSES, NO BORDERS, NO DEPORTATIONS!

We declare that Migrant Rights are Workers Rights !

Since May 1, 1886 immigrant workers have been on the frontlines of workers struggles, taking direct action to demand justice and equality. This year, the Status for All! Coalition* takes to the streets in the context of crippling austerity measures and increasing attacks against refugees, migrant workers and immigrant communities. We join the call for a general social strike put forth by the CLAC.

Like the Chinese migrant workers who built Canada’s railroad at the turn of the century, immigrants have historically been the back-bone of the capitalist economy.

Today, Canada is closing the door on refugees, families, women who are victim of violence, and LBGT communities while entrenching a just-in-time immigration regime of migrant worker programs as a way to control migration and boost profits for big business and its primary industries.

These temporary worker programs are designed to legalize slavery, forcing migrant workers to labor long hours for low pay, under the constant fear of deportation by their employer. Migrant workers have no access to permanent status, no social protection or healthcare, no labor standards, no benefits, and no rights. They are fully taxed, and completely exploited.

Canada counts on the fact that migrant workers send money back to their families. Remittances account for more money than the first-world aid to developing countries provided for by governmental agencies like CIDA. In this way, the government doesn’t have to invest in peoples’ well being. It is the migrant worker that bears all the costs of the imperialist, capitalist economic system here and in their home country.

*Solidarity Across Borders, No One Is Illegal Montreal, JOC-Montreal, the Immigrant Workers Center, Mexicans United for Regularization and Dignidad Migrante are joining the May 1st anti-capitalist demonstration under the banner “Migrant Rights are Workers Rights”.

We are calling for the abolition of immigration controls that protect the free movement of capital, while stifling the freedom of movement of people.  We oppose anti-migrant legislation like bill C-31, racial profiling, police surveillance and the criminalization of immigrant communities. We reject the militarization of the border, immigrant detention and deportation, and the prison industrial complex. We struggle to build a ‘Solidarity city’ in which everyone has access to all social services no matter their immigration status. We demand Status for All!

We are also organizing a “Status for All” march on Saturday May 26th at noon (at metro Jean-Talon, corner Jean-Talon and Boyer). Join us!

NO ONE IS ILLEGAL!