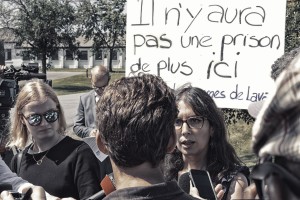 A press conference was held on Monday July 15th in Laval in response to the announcement of Construction Tisseur Inc, a small company based in Val-David, Québec, as general contractor for the new migrant prison in Laval. Construction on the prison can now be expected to begin any day.

The press conference aimed to send a clear message to Yannick Tisseur, president of Construction Tisseur: this is not a neutral project. By accepting this contract, you are taking sides, helping to deprive people of their freedom and safety. You are positioning yourself on the side of a violent system of global apartheid based on wealth and privilege.

While the press conference was supposed to take place on the site of the new prison itself, CSC employees told journalists they could not film on site. The journalists refused to insist on their right as members of the media.

Add your name to the statement against the construction of a new migrant prison in Laval.