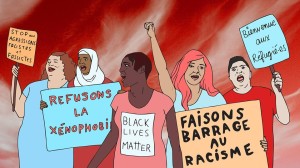 This event was organized and will take place in Tio’tia:ke (“Montreal”), unceded Kanien’kehá:ka territory.

On November 12, 2017 and October 7, 2018, two large antiracist demonstrations attracted thousands of people to the streets of Montreal in order to denounce the racism that is becoming more and more normalized in our society, as well as the xenophobic, Islamophobic, misogynistic, homophobic and transphobic rhetoric increasingly present in the public political sphere and spread by Quebec far-right groups. This is why we must resume mass mobilizations, starting with a third major demonstration, which will take place in the context of the International Day for the Elimination of Racial Discrimination. The event aims to show our solidarity with anti-racist and antifascist movements worldwide, and also to fuel popular resistance against racist, Islamophobic and xenophobic actions.

The context is all the more urgent given the recent intentions and announcements of the CAQ government, which seems determined to ban religious symbols in public services, particularly targeting Muslim teachers wearing hijab or niqab and who work in the public school system. We demand the autonomy and the right of women to dress as they want without having to justify themselves to anyone! It is not up to the state to impose restrictions on women’s clothing choices. It is the state that must be secular, not the individual!

At the same time, the Legault government announced that its administration plans to cancel over 18,000 permanent resident applications (Bill 9) in order to adopt a “more selective” system for accepting newcomers. This bill will affect more than 54,000 people. We categorically denounce these measures! We denounce all the more strongly that while the Quebec government upsets the lives of thousands of people settled here, Legault struts around in Paris in hopes of attracting French immigrants to Canada, who will, according to him, “better respond” to the needs of the economy.

Through Bill 9, the government demonstrates its willful ignorance of the fact that immigration to Quebec and Canada is the result of centuries of colonialism and imperialism, destructive ideologies still at work today, and for which these states are in part responsible! Blaming immigration for the ills of society is not only a hypocritical gesture, but also a xenophobic act that must be firmly denounced! No to xenophobia, yes to immigration! Racists, out! Refugees, welcome! We demand a status for all!

A dramatic situation requires an urgent and strong response! This call for a demonstration on March 24th is part of ongoing resistance – in Quebec and elsewhere – against the rise of racism, xenophobia, Islamophobia, anti-Semitism, the far-right, and oppression in all its forms. We march not only against the xenophobic policies of the Québec government, but also against the conditions that have directly contributed to the current situation: a climate of trivialization and normalization of far-right racist and ultranationalist rhetoric, which works for the greater benefit of the neocolonial capitalist system in which we live.

Join us on March 24th, against racism and xenophobia! For the right to immigration, equality and dignity!

*** STATEMENT REGARDING THE NON-PARTISAN NATURE OF THE EVENT ***

Just like the October 7, 2018 Mass Demonstration Against Racism, the March 24, 2019 Mass Demonstration Against Racism and Xenophobia: Here and Everywhere is a non-partisan event. Our demands, as well as the very nature of the anti-racist and antifascist struggles, are not limited to any specific government or party, nor to the parliamentary/electoral system in general. As we have said from our first event in 2017, we believe that all political parties benefit from and are complicit in the normalization of xenophobic, anti-Muslim and racist discourse in Quebec’s mainstream political discourse. No party participating in the electoral system is exempt from this critique.

While this remains a mass protest, and politicians and members of political parties are therefore welcome to participate as individuals, we ask that you do not bring any political party banners to this event. Furthermore, we ask that you do not speak to any media during the demonstration, and instead refer all media to the event spokespersons, who will be near the sound truck up to the beginning of the march. There will also be a press briefing before the march, the time and place of which will be announced in advance.

Thank you for your cooperation with this request.