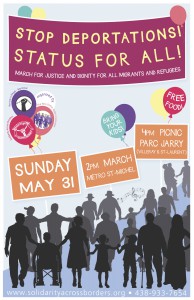 We will march through the neighborhoods of St-Michel and Villeray, ending at Parc Jarry in Parc-Extension.
A child-friendly event. Bring your kids!
Please get in touch about any accessibility needs.

We march together to demand an end to deportations and detentions, and we denounce the double punishment of migrants with criminal records. We demand Status for All and organize for a Solidarity City for all residents of Montreal. Read more about our demands here: www.solidarityacrossborders.org/en/a-propos/revendications

We reject colonial borders and support struggles for Indigenous sovereignty and self-determination. Read our Statement of Support for Indigenous Struggles and Sovereignty here: www.solidarityacrossborders.org/en/statement-of-support-for-indigenous-struggles-and-sovereignty.

This year, we march in opposition to growing austerity measures and in solidarity with grassroots resistance efforts in Montreal and across Turtle Island. Austerity weighs most heavily on those who are the most precarious: Indigenous peoples, migrant workers, non-status residents, and new immigrants, who are targeted and criminalized through racist and discriminatory policies.We highlight this year the mobilization of the Haitian community, as part of the Non-Status Action Committee, which is resisting the deportation of more than 3500 members of our community as a result of the lifting of the moratorium on deportations to Haiti and Zimbabwe.

We highlight too the mobilizing by temporary migrant workers against the four-year limit on temporary foreign worker permits, which effectively subjects thousands of migrants to deportation as of April 1st.

These efforts build on current and ongoing mobilizing efforts within many diverse communities — such Mexican and Roma migrants as well as domestic workers — as well as by individuals and families who are resisting their deportations.

The situation is urgent: thousands of members of our community face removal in the coming months. There are currently a minimum of 500,000 undocumented residents of Canada, with upwards of 100,000 living in Montreal.

We also march in solidarity with multifold struggles against racism, particularly against Islamophobia. We are building on ongoing efforts against racism in Quebec society, such as the recent anti-Charter mobilizations and current solidarity efforts with the Muslim community against racist scapegoating.

We highlight these issues in more detail in the longer callout linked here: www.solidarityacrossborders.org/callout-stop-deportations-status-for-all-may-2015

This May 31st, we take to the streets in solidarity with members of our community, our families, our comrades, our friends. We will be marching to celebrate the resistance of those struggling against deportations and stand together in our struggles for justice and dignity. Join us!
—–

– GET INVOLVED: We encourage your participation in mobilizing for this year — postering, flyering, phone-arounds, social media, support events, fundraising and more. Get in touch to lend a hand.

– ENDORSE: We encourage your organizations’s endorsement of this year’s march. An endorsement means your group supports the demands of our march, and will minimally publicize the march among your members. To endorse, please e-mail solidaritesansfrontieres@gmail.com.

– FOR A SOLIDARITY CITY!: We encourage Montreal-area organizations and groups to discuss and collectively sign this declaration:www.solidarityacrossborders.org/en/francais-declaration-pour-une-cite-sans-frontieres

Status for All! Not one more deportation!
Land, freedom, self-determination, Canada is an illegal nation!
Together, we will build a Solidarity City of mutual aid and resistance!

Organized by Solidarity Across Borders,
with the support of No One Is Illegal-Montreal and the Non-Status Action Committee.
web: www.solidarityacrossborders.org
e-mail: solidaritesansfrontieres@gmail.com
telephone: 438-933-7654
facebook: www.facebook.com/CiteSansFrontieres
twitter: @SolidariteMTL