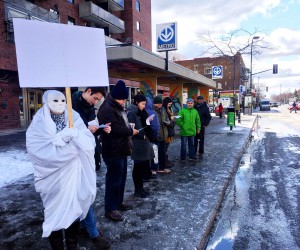 A group of non status women began haunting the riding office of Justin Trudeau yesterday. After calling on Mr. Trudeau on numerous occasions to take a position on people living without status in Canada, a dozen women, shrouded and carrying blank placards, appeared before his office to symbolize the fact that they are invisible, silenced, and ignored.

“You don’t see us, you don’t hear our voices, but we are here: we will stay here, we live here, it’s a fact!” said Leila, one of the spokespeople for the collective during a press point in front of Mr. Trudeau’s office.

“We clean your homes, serve you in restaurants, work on assembly lines, produce the food you eat. We pay taxes,” they wrote in an open letter to the Prime Minister in November 2015. They volunteer, raise their children, and contribute to the wealth of Canada, but their precarious status renders them particularly vulnerable to exploitation, abuse, and fear.

The Non-Status Women’s Collective of Montreal has been awaiting a response from the Prime Minister since delivering its letter in November. The Collective renewed its appeal in a press conference in January 2016, “We want status now” and again in a short video, “We want to live in dignity, security and peace,” launched on March 8th for International Women’s Day.

There are anywhere between 80,000 and 500,000 people in Canada without legal status, according to Immigration Canada’s own estimates (2008). Many more live without permanent status. These people contribute to society in innumerable ways but are excluded from the most basic public benefits and security – they effectively subsidize those with status. They are vulnerable to extreme exploitation and many live in constant fear of arrest and deportation or suffer years of family separation.

Despite the new government’s many statements supporting more open borders for migrants and refugees, little has been said about people without legal status. “In hope, we await the humanity this new government promises; we hope for change that, for once, also includes us,” wrote the women. “If the government has the power and will to bring in new people, it also has the power and, we dare to hope, the will to welcome us and reunite our families; we who have been working, volunteering, contributing to society, and are already ‘integrated’.”

Leila, masked and shrouded in white, finished her speech in front of Mr. Trudeau’s office, “Thank you for listening to this message from ghosts!”

The Non Status Women’s Collective will continue to call on the government and society until there is a response, with hope and a demand: the regularization of everyone without status in Canada.

Open Letter from the Non Status Women’s Collective of Montreal

Video “We want to live in Dignity, Security and Peace“