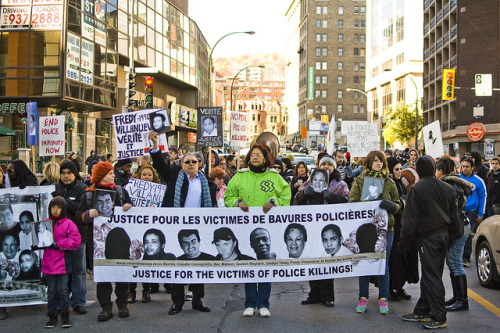 
Family-friendly; welcome to all! Rain or shine.
Please get in touch about any accessibility needs.

* INVITE your friends via facebook here: www.facebook.com/events/173957756129513/
* ENDORSE this demonstration as an organization (e-mail 22oct.mtl@gmail.com to send your endorsement).The families of people killed by the police, along with their friends and their allies, are organizing the fourth annual commemorative vigil to remember those who have lost their lives at the hands of the police. These families, who face an uphill battle in uncovering the truth and obtaining justice for their loved ones, need our support.The purpose of the march is to:
REMEMBER the victims who lost their lives to police violence and abuse;
and
SUPPORT their families in any way we can.We remember Anas Bennis, Claudio Castagnetta, Ben Matson, Jean-François Nadreau, Quilem Registre, Gladys Tolley & Fredy Villanueva and we support their families.

In Montreal, there have been more than 60 people killed by the police since 1987. This includes the killings of Mario Hamel and Patrick Limoges (June 7, 2011) and Farshad Mohammadi (January 6, 2012). This past summer Robert Hénault, 70, was shot inside his small Plateau apartment and died of his injuries on August 8.

This year, we also support all those who have survived police beatings. This includes Didier Berry who was beaten and hospitalized by Montreal police on October 24, 2012, as well as Norbert Mestenapeo, a young Innu father who was brutally beaten by Sûreté du Québec police on July 16, 2013 in the community of Unamen Shipu on the North Shore.

We will also critique the Quebec government’s proposed projet de loi 12 sur les enquêtes policières indépendantes; we call for truly independent inquiries into police killings and beatings, without the bias of current or former cops.

Join us in denouncing these and all the other examples of police violence and impunity.
—–

-> About the killing of Farshad Mohammadi: http://montreal.mediacoop.ca/story/police-killing-farshad-mohammadi-exposing-root-causes/9665

-> About the killings of Mario Hamel and Patrick Limoges: www.lacrap.org/deces-de-mario-hamel-et-patrick-limoges-la-crap-exige-une-enquete-publique

-> About the beating of Didier Berry: http://justicedidierberry.com/

The Coalition Against Repression and Police abuse has compiled a comprehensive list of police killings in Quebec and Canada which is linked here: www.lacrap.org/liste-des-noms-des-personnes-decedees-aux-mains-de-la-police-au-canada

About the Justice for the Victims of Police Killings Coalition:

The Justice for the Victims of Police Killings Coalition currently involves the family members and friends of Anas Bennis, Claudio Castagnetta, Ben Matson, Jean-François Nadreau, Quilem Registre, Gladys Tolley and Fredy Villanueva, all of whom died as a direct result of police actions and interventions. We continue to reach out to family and friends of other victims of police killings.

This initiative came out of the Forum Against Police Violence and Impunity in 2010, during which the families expressed their desire to come together to remember their loved ones and strengthen their respective struggles for dignity, justice and the truth. The symbolic date of October 22 was subsequently chosen for a family-friendly event to commemorate the victims of police killings to coincide with the National Day of Protest in the United States organized by the October 22nd Coalition to Stop Police Brutality, Repression and the Criminalization of a Generation, which has been mobilizing every year since 1996.