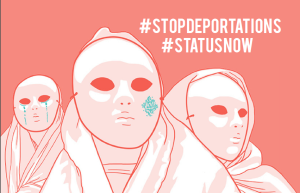 Delivered to Justin Trudeau’s office in Montreal on November 27th, 2015

We are women and mothers who live and work in the shadows, invisible and excluded. We are addressing the public for the first time together.

We live in precarity because of our immigration status. Our precarious status threatens our security, our liberty as women, our rights as workers, our families. In many ways our futures, our dreams, are blocked. Our children – born here or living here for years – are terrorized by the constant menace of deportation, which threatens to tear them away from their schools, friends and communities, or even separate them from parents. Some families have already been broken apart by the deportation of a family member and only hope to one day be reunited.

We work here, we contribute to the wealth of Canada. We clean your homes, serve you in restaurants, work on assembly lines, produce the food you eat. We pay taxes. However, we are excluded from all social programmes: education, healthcare, child benefits, daycare, unemployment insurance. We are among the most exploited people in society: we work long hours in very difficult conditions, we do not get minimum wage, we do not have job protection, we are not unionized. Despite our skills and our qualifications, we will never be promoted or “rise in the ranks” like others.

For many years, we have struggled to regularize our status. We have filed endless documents in long and costly procedures; we have proven every aspect of our lives, over and over again. We are tired of filling in forms and gathering documents and waiting for arbitrary decisions in fear and uncertainty. Some of us have degrees, some of us don’t; some have familes, others are single; we came to Canada for different reasons and we can’t leave. We don’t want to be judged individually on a case by case basis but simply accepted as human beings, equal to all other members of society.

Now, many statements made by the new Prime Minister and Ms Gregoire fill us with new hope. Maybe we are naive to hope, but without hope we cannot live.

Mr. Trudeau has said he “will take immediate steps to reopen Canada’s doors, and will make reuniting families a top priority”(1). Opening the borders to immigrants, families and refugees is good news! If the government has the power and will to bring in new people, it also has the power and, we dare to hope, the will to welcome us and reunite our families; we who have been working, volunteering, contributing to society, and raising our children here for years and are already “integrated”.

Mr. Trudeau and Ms Grégoire have also spoken strongly about their commitment to the rights of women and to a good future for youth. Surely those rights extend to us too, who are among the most vulnerable women in the country; and surely Mr. Trudeau also had our children in mind when he said, “Each child deserves to be raised in a world free of discrimination, violence, and exploitation, and each one deserves to grow up with proper nutrition and health care, a good education, and safe communities.”(2)

We live here; we will remain here. This is our home and our children’s home. We want to live in dignity, peace and stability; we want an end to the fear that constantly tortures us. In hope, we await the humanity this new government promises; we hope for change that, for once, also includes us.

By means of this letter, we are asking the Prime Minister and Ms Grégoire to meet us to listen to our demands and hear about our everyday struggles.

We are also asking the Prime Minister to take a position on the regularization of non-status people in Canada.

* Fatma, mother of four children, part-time restaurant worker, afraid for the future of her children

* Emma, mother of two children, part-time worker in a grocery store, nine years struggling for papers, children suffering from separation from their father who was deported more than a year ago

* Marie, looking for work, mother of two children, hoping for a better future for them in Canada

* Emelyne, mother of Rose, have struggled for two years for rights in Canada after my daughter’s father assaulted us

* Sofia, I have been here 5 years, the government rejected my case because I am Mexican, that is what my lawyer said because I did everything to be accepted. I am a responsible and honest woman, I work to support myself, and my mother who is elderly and sick in mexico. In my last job i faced discrimination, shouting, and exploitation because they knew my situation, and they did the same to other people in the same situation. for 11 months i had a hand injury, because of the heavy work, and there was no compensation, and I could not stop working. my sisters and i face many injustices and stress. Now I am looking for work, and above all hope for us, to have a dignified life, and stop living in isolation and fear. I call on your human side, because we all have daughters and sisters and mothers who we do not want to suffer the same, thank you !!

* Ana, I am a mother of two children. We’ve been here 9 years, my two children have made their lives here and we don’t want to bring them to the insecurity that exists in Mexico, with its corrupt government.

* Leonor, we people without status, we have made a life here and we are fighting to have the same rights, like others.

* Guadalupe, single mother, Mexican and mother of four. came in 2008 to seek protection from government of Canada but refused. afraid of returning to Mexico, waited her in hope of being accepted on humanitarian grounds. my son was deported in 2014. i couldn’t do anything.

* Rosmarie, living without status for over 30 years

* Itzel Gladin Garcia, two children. exhausted. the system kidnapped her children but she is fighting for her kids and is continuing the struggle.

* Nur: I have been here since 2012. I have a daughter and a son. My children like going to school but the uncertainty and threat of deportation makes that difficult. I feel almost hopeless and have difficulty giving hope to my children. It’s getting harder. I don’t have family here and my husband left, leaving me with the children. I am tired, exhausted. I am seeking help for me and other women in my situation. I ask myself all the time why we are treated differently, without the same rights as other people here.

* Amanda, Hungarian mother with two children and my husband requested protection of the government of Canada but was refused: afraid to return to my country, I am waiting for the humanitarian with my family

* Rosalinda, young woman without status, I am waiting with hope to be accepted on a humanitarian application with my family

If you are a non-status woman and would like to add your name to this letter, please email a brief description of your situation to: femmes.sans.statuts@gmail.com.