Paola Ortiz accepted by Quebec, asks Canada to return to her children 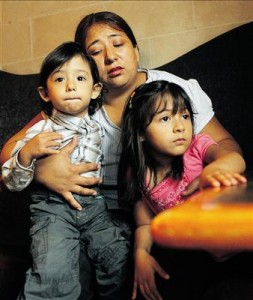 December 23, 2011, Montreal — Three months after Canada deported Paola Ortiz to Mexico, the mother of two Canadian citizen children has received her selection certificate from the Quebec immigration authorities. Today, Ortiz is applying to the federal authorities to allow her to return to Canada as a temporary resident, so she can be reunited as quickly as possible with her children, aged 2 and 5. Now welcome in Quebec, there remains one man standing between Paola and her family: federal immigration minister, Jason Kenney.

Ortiz had fled Mexico in 2006 to escape domestic and sexual abuse at the hands of her then-partner, who is a federal officer in the Mexican police. Despite  lots of individuals and more than 20 community, women’s and human rights groups urging the federal government to reverse its decision to deport Ortiz, and widespread condemnation of the deportation she was deported in September 2011.

« Amongst Western nations, Canada has one of the worst records when it comes to deporting non-citizen parents of Canadian children, and thus of breaking apart countless families» decries Ortiz’s lawyer, Stewart Istvanffy. «We have a government that calls itself the protector of family values, but where is the respect for the sanctity of family life? It’s pure hypocrisy. »

Since her removal, Ortiz has been forced to live in hiding, as she fears for her life at the hands of her ex. As more time passes, she is increasingly distressed that her kids, who have special needs, are being denied the care of their mother. She thanks the Quebec immigration minister for acting with compassion and in the best interests of her children, but this time of year, it is hard for Paola to be in good spirits. As more time passes, and as Christmas approaches, Paola’s anguish intensifies.

Solidarity Across Borders, which is supporting Ortiz in her struggle to return to Canada, and over 700 individuals who have signed an online petition urges the federal government in whose hands her case now rests to take action so that she can be reunited with her kids as soon as possible. Because of the Canadian government’s intransigence, two Canadian children have been deprived of their mother for months and must now spend Christmas without knowing when they will see her again.  It has left them both traumatized.

← Stop Jacob’s deportation: No double punishment
Declaration: Education for All! →