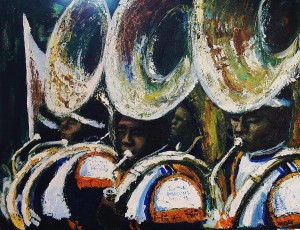 Public Mourning for Mr. Bolante Idowu Alo and to honour all migrants who fight for their lives and dignity against the injustice of the Canadian immigration system

No to deportations. Reinstate the moratorium on deportations to Haiti. Abolish the Border Security Ministry

Rally
In front of CBSA offices 1010 St-Antoine (Bonaventure Metro)
Thursday, 30 August at 7am

** Dress in black
** Bring flowers and messages to leave

Saddened and shocked by the violent death of Mr. Alo at the hands of the Canadian Border Services Agency (CBSA), organizations fighting for migrant justice are gathering for a public mourning in honour of Mr. Alo and all victims of the injustice of the Canadian migration system, including the thousands of members of our communities who have been deported in the last months.

Nothing can justify the fact that Mr. Alo still had no status after 13 years integrating into Canada. All that Mr. Alo asked was for his life to be protected. This is also what migrants who have recently crossed the Canadian border to make a refugee claim are seeking.

The CBSA must be held responsible for Mr. Alo’s death on 7 August 2018 on a plane at the Calgary airport while two CBSA agents were attempting to deport him. The death of Mr. Alo should impel vigorous social opposition to the use of deportations as a weapon of mass repression.

The death of Mr. Alo is emblematic of the violence of the Canadian immigration system and its lack of respect for the lives of refugees. Many people threatened with deportation by the Trump regime sought refuge in Canada following welcoming messages from the Canadian government. However, less than 50% of those whose cases have been heard have been accepted; this drops to 10% in the case of Haitians. Canada is deporting the majority to their countries of citizenship – even to Haiti, despite the fact that Canada issued a warning against travel to Haiti.

We are again demanding the abolition of the new Border Security ministry. We demand the reinstatement of a moratorium on deportations to Haiti and an end to deportations of refugees who have no other choice than to cross irregularly because of the Safe Third Country agreement. No one should be forced to a life in the shadows, prey to exploitation and under fear of arrest.

Join us in front of the CBSA offices at 1010 St-Antoine, Thursday, 30 August at 7am to make these demands heard and to honour all migrants subjected to the violence and injustice of the immigration system.

Stop the deportations! No to case by case! Status for all! ALL refugees welcome!