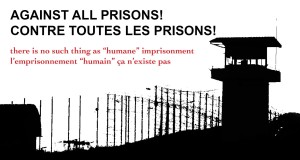 From the 21st to 26th of October, 2018, Montreal will be the site of the International Corrections and Prisons Association (ICPA) conference, hosted by Correctional Services Canada. The theme this year is “Beyond Prisons: The Way Forward.” Highlighted as topics of some of the conversations are: going forward to make imprisonment and community supervision both more humane and effective, using technology to humanize corrections, and improving community engagement.

The conference is aimed at corrections and prison staff, offering them a mess of programming, including academic research, presentations, and guided visits to prisons, to entrench the view that prisons can be humane, and their professions anything other than deplorable. Also invited are CEOs of companies who cater their businesses towards prisons—whether that be in the form of making electronic bracelets or making the terrible food served in prisons. The conference will include “facility visits” to a halfway house in Saint-Henri, two federal prisons in Laval, and the provincial prison in RDP. (For more info on all the different aspects of the conference visit: icpa.ca/montreal2018)

Against all prisons, even the “nice” ones!
The only way forward is an end to prison!

We think there are many reasons to oppose this conference, but have decided to highlight the following:

Under the pretext to create more “humane” detention conditions for migrants, CBSA has been awarded huge government budgets for creative new control measures for migrants. Work has begun to attempt to construct a new, higher tech, “more humane” migrant prison in Laval, on land owned by the Correctional Services of Canada. It is meant to replace the current migrant prison right nearby, and “look less like a prison.” In the context of rising fascism and anti-migrant sentiment in Quebec and Canada more broadly it is entirely possible that the number of prison spots available to enforce deportations could double in the coming years, should the current prison be kept open and the new one successfully built.
Regardless, a new humanized migrant prison, or the “alternatives to detention” such as ankle bracelets or the equivalent of parole officers for migrants that the government is proposing, should not be embraced simply because they look less like traditional prisons. They serve the same purpose: to expand the CBSA’s capacity for border enforcement and immigration policing—for imprisoning and deporting migrants and to rip people away from their families and communities.

As corrections officials gather to talk about how technology can make prisons more humane, we think about the new protocols in Pennsylvania state prisons that are using technology to sterilize communications and make it impossible for people to send books and other physical mail to people inside.
For more information: booksthroughbars.org/takeaction/

As Correctional Services Canada hosts this conference, we think about the recent outcries against solitary confinement and psychological risk assessments of Indigenous prisoners. We think of the role of Canadian penitentiaries in imprisoning Indigenous people resisting colonization for centuries. We think of the early jails that imprisoned Black people resisting slavery, that continue to imprison Black people at high rates today. We think of all those who have died in prison and who continue to die in prison and those resisting prisons around the world.

We are inspired by the recent Prison Strike that took place in many prisons across the US and Canada, which drew attention to the terrible conditions in jails and prisons, but also to the foundations of the prison system as a whole in slavery and colonialism. The death of a man incarcerated in remand in Burnside jail in Halifax just after the strike reminds us of the stakes of the continuation of imprisonment, in any form. The strength of resistance both inside and outside prison walls during the prison strike inspires us to reject the ICPA’s attempt to make imprisonment seem normal and palatable. We reject the attempt to whitewash the reality of imprisonment and call for opposition to this conference.

← CBSA Offices Shut Down by Migrant Justice Activists in honour of Mr. Bolante Idowu Alo and our Deported Friends and Neighbours
Stop the Prison! Info-session on the government’s plan to build a new migrant prison in Laval and what is being done to oppose it →