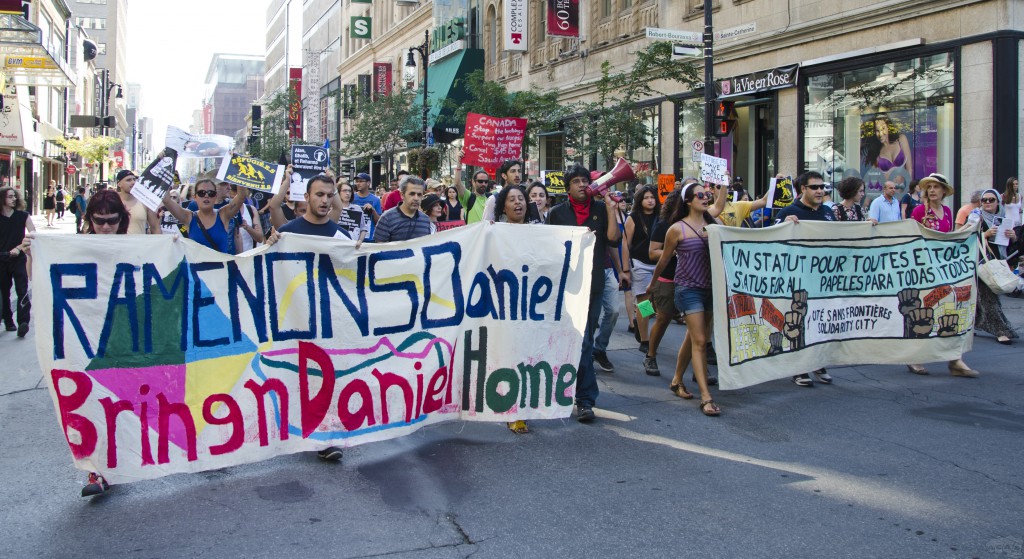 Report-back: REFUGEES WELCOME / OPEN THE BORDERS
Montreal Demonstration, September 5, 2015
On Saturday, September 5, 2015, more than 700 people responded to a call by Solidarity Across Borders for a protest to denounce the Canadian government and their complicit role in the deaths of refugees and migrants, in the context of the recent deaths of Alan Kurdi, 3, his brother Ghalib, 5, and mother Rehanna. The Montreal protest was part of cross-Canada mobilizations in more than 20 towns and cities, as well as mobilizations worldwide in support of refugees and migrants.
This brief report-back includes information about: i) Upcoming Protest; ii) Demo Flyer; iii) Posters; iv) Photos; v) Speakers; vi) Media Articles; vii) Defying P-6 By-law. Please share widely.

If you have more photos (or video), please share at solidaritesansfrontieres@gmail.com

v) SPEAKERS AT THE DEMONSTRATION

The following people spoke at the beginning of the “Refugees Welcome / Open the Borders” demonstration in Montreal:

– Huseyin Akyol, a member of the Kurdish community in Montreal, from a family of Kurdish refugees in Turkey

– Maria, 16, a high-school student in Montreal, who spoke to denounce the recent arrest and deportation of Daniel from a Montreal-area school
For info about the Bring Daniel Home campaign, visit: www.solidarityacrossborders.org/category/bringdanielhome

– Viviana Carol, member of the Bring Daniel Home campaign and organizer with the Immigrant Workers Center, speaking about undocumented residents of Montreal

– Cathia Cariotte, member of the Haitian community and organizer with Unissons-nous – Let’s unite
For more information about Let’s Unite: www.facebook.com/pages/Unissons-nous-Let-s-unite/460116220823550

– Avi Grenadier, member of the Jewish community in Montreal, making links between current refugee policies and Canada’s “None is too many’ policy against Jewish refugees
Read Avi’s speech here: www.facebook.com/events/765456080244145/permalink/766501046806315/

– Sheila Sedinger, migrant from Mexico and member of Solidarity Across Borders, who successfully resisted a deportation order
For more information: www.solidarityacrossborders.org/support-sheila-sedinger

As well as interventions by Jaggi Singh and Rosalind Wong, organizers with Solidarity Across Borders.

– (Global) Protest urges feds to do more for refugees (with video)
http://globalnews.ca/news/2205621/protest-urges-feds-to-do-more-for-refugees/

The “Refugees Welcome / Open the Borders” demonstration openly defied the P-6 bylaw. We were able to march freely, on a route of our own choosing, without any police harassment, arrests or tickets. We encourage organizations that have not yet done so to add their name to the following Community Declaration against P-6, signed by more than 80 groups: www.solidarityacrossborders.org/en/solidarity-against-police-repression-in-montreal-we-will-not-submit-to-municipal-by-law-p-6