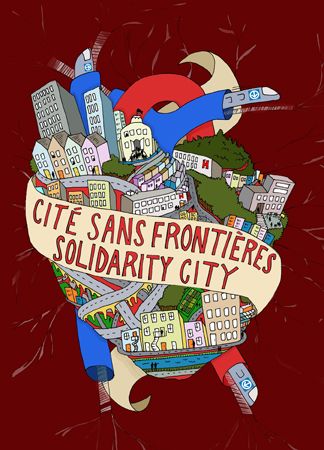 Community & Media Communiqué
Please share widely
Canadian government announces possible deportation of thousands of community members to Haiti & Zimbabwe
Solidarity Across Borders demands full and inclusive regularization of all migrants and an end to deportations
Montreal, December 4, 2014 — This past Monday, the Canadian government announced the end of the moratorium on deportations to Haiti and Zimbabwe, which cruelly exposes at least 3500 people to potential removal in the coming years, if not earlier. Most of these individuals and families live in the Montreal-area.
[The original joint Canada Border Services Agency (CBSA) and Citizenship and Immigration Canada (CIC) release is linked HERE.]
Solidarity Across Borders, a migrant justice network active in Montreal for the past decade, denounces the fact that Haitian and Zimbabwean migrants living in Canada have been left in limbo for years and are now threatened with deportation. We reiterate our core demand of status for all: all migrants living in Canada should be regularized. By regularization, we mean an inclusive and ongoing program for all migrants to gain full and permanent residency status, as well as access to full rights and services.
[Our demand for regularization is rooted in the following principles for regularization articulated more than a decade ago at the Status Conference in Toronto; click HERE.]
As part of building a Solidarity City, a shared community whose members actively support each other and refuse to be complicit in division and isolation, we call for the inclusion and welcoming of all migrants in Montreal, particularly migrants of Haitian and Zimbabwean origin who will now be facing removal. We declare our support and solidarity for community-led efforts that resist deportations.
[Learn more about Solidarity City HERE.]
Solidarity Across Borders rejects the specific measures introduced by the Canadian government to deal with people  affected by the lifting of the moratoria on deportations to Haiti and Zimbabwe. Instead of proceeding “case-by-case” via individual humanitarian claims – an onerous process allowing a single bureaucrat to determine whether an individual “deserves” to stay -there should be a collective solution that allows all Haitians and Zimbabweans living in Montreal a straightforward path to status and regularization. Under the government’s plan, families will have to wait in anxious uncertainty for many more months before knowing if they can stay. It will also cost $550 per adult and $150 per child to make a humanitarian claim, which will exclude many individuals and families with modest incomes from the outset. The government’s plan amounts to a money grab from precarious migrants, with no guarantee of status at the end of the process.
We also oppose the proposal put forward by several NGOs that only those who have lived here for three years should be allowed to stay. We support full status for all migrants, including those who have lived in Canada for less than three years. We should not be complicit in the state’s game of creating divisive categories of “deserving” and “undeserving” migrants.
We highlight our opposition to the double punishment of individuals with criminal records, which will be a barrier to status for some people who were protected by the moratorium. People with criminal records should not face discrimination in their attempts to secure permanent status in Canada, and the reality of double punishment should be recognized in building a grassroots movement to resist deportations.
Essentially, the government’s plan encourages community divisions and perpetuates isolation. Solidarity Across Borders stands for solidarity and support between individuals and communities.
Montreal has a strong history of non-status migrants resisting deportations, whether as individuals or families, or as part of collective efforts. We recall the inspiring organizing of the Committee of Non-Status Algerians after the moratorium on removals to Algeria was lifted in 2002, as well as more recent efforts to resist deportations by Mexican, Roma and countless other migrants.
Faced with fear, isolation and division, Solidarity Across Borders actively supports communities fighting deportation, through solidarity, mutual aid, and direct action.
—–
For any inquiries, including media requests, contact:
tel: 438-933-7654
e-mail: solidaritesansfrontieres@gmail.com
twitter: @SolidariteMTL
web: www.solidarityacrossborders.org
facebook: www.facebook.com/CiteSansFrontieres