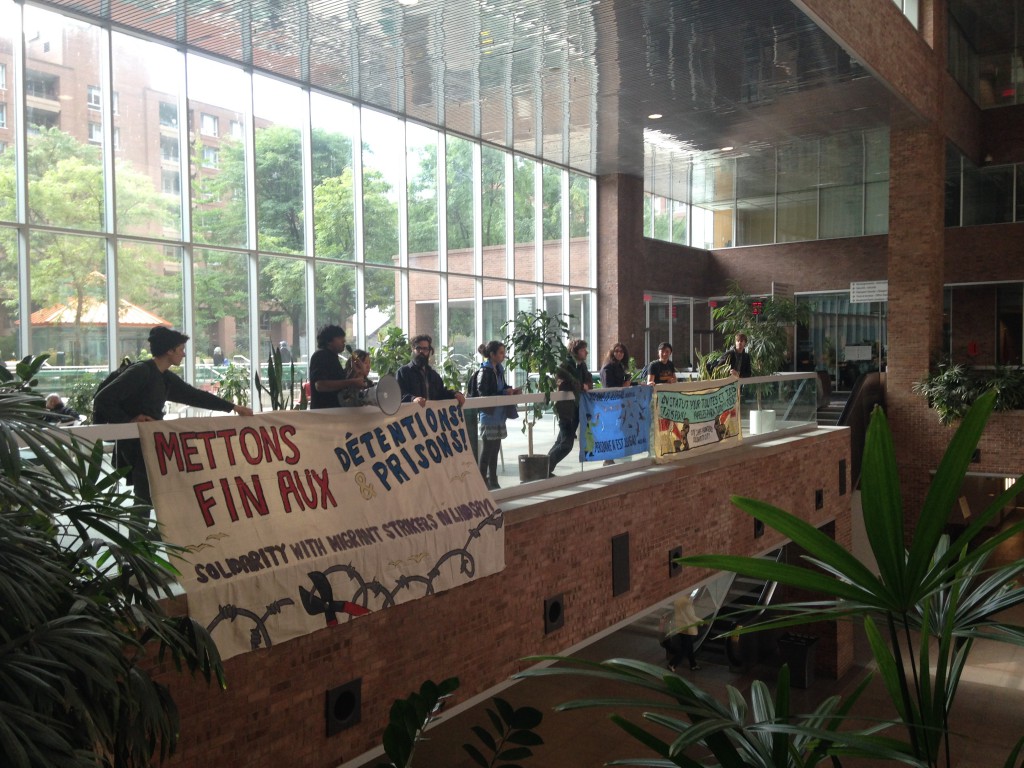 A surprise disruption took place this morning at the Guy-Favreau Complex to commemorate the one-year anniversary of the hunger strike undertaken by 191 migrants detained in a maximum-security prison in Lindsay, Ontario.

A few PHOTOS from the modest disruption have been posted here: www.flickr.com/photos/lecollectifnoborders/sets/72157647656454906/

The press release from today’s action is included below.

In honour of migrant detainee strikers in Lindsay, Ontario and to demand an end to migrant detention and the entire racist prison system. In front of the Laval Immigration Detention Centre (200 Montée St-François) and the Federal Training Centre, a federal prison across the street. For full details, including transport info by bus, bike or car, visit: www.solidarityacrossborders.org/en/20-sept-rally-no-borders-no-prisons

Solidarity disruption: Activists stage a disruption at the Immigration and Refugee Board in solidarity with migrant detainees on strike in Ontario and all detainees

MONTREAL, September 17 2014 – In coordination with actions taking place in Ottawa, Toronto and Guelph, a surprise disruption took place this morning at the Guy-Favreau Complex to commemorate the one-year anniversary of the hunger strike undertaken by 191 migrants detained in a maximum-security prison in Lindsay, Ontario. By disrupting the complex where the Immigration and Refugee Board holds its detention reviews, protesters expressed their solidarity with the Lindsay strikers.

This time last year marked the beginning of the biggest strike by detained migrants in Canada. The detainees challenged the prison authorities by refusing to return to their cells, boycotting their detention reviews, as well as fasting, some for up to 60 days. The strikers had four demands: 1) Freedom for the wrongly jailed 2) End arbitrary and indefinite detention 3) No maximum security holds, and 4) Overhaul the adjudication process.

The choice to hold the action at the IRB was no accident. It is at this location that the Immigration and Refugee Board holds its hearings for detention reviews every day. These hearings are a means by which to strengthen the arbitrary decisions that legitimize the unjust detention of thousands of migrants each year in Canada.

Furthermore, although this action aims to celebrate courage and determination of the strikers in Lindsay and all detained migrants, it also seeks to denounce the prison system, the racist immigration system and the double punishment of migrants with criminal records.

By extension of today’s action, this Saturday September 20, protestors will demonstrate in front of the Laval Immigration Detention Centre – the largest detention centre in Canada – and the Federal Training Centre, a federal prison across the street, to demand an end to the detention of migrants and to the entire prison system.

The criminalization and detention of poor and marginalized communities is not new, but has intensified with new changes to criminal and immigration laws in the past years. Millions are invested each year into the incarceration system by the Canadian government.