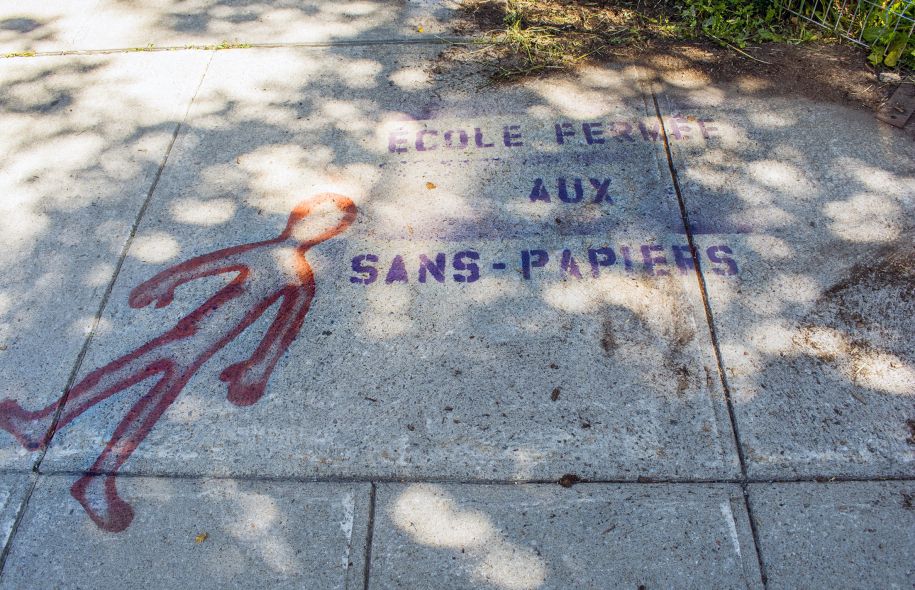 The teenager facing removal today was in the end deported on Aeromexico Flight AM681 at 10am. We continue our struggle against deportations and for Status For All! Thanks to everyone who attended the airport picket today.

> PROTEST AT MONTREAL’S INTERNATIONAL AIRPORT
Thursday, October 16 at 7:30am
Meet at the departures section, at the Aeromexico Flight #681 line-up
(please read below for more details, including transport to the airport)

-> CALL OR WRITE AEROMEXICO, the airline that will be deporting a Montreal-area teenage student. Their e-mail addresses are servicioaclientes@aeromexico.com.mx or customerrelations@aeromexico.com. Their toll-free number is: 1-800-237 6639; choose your language option, listen to the recorded announcements, and then press “1” to convey that Aeromexico’s Flight #681 (departing Montreal on Thursday, October 16 at 10am) should not allow a teenager to be deported alone, without his mother. Aeromexico should not be complicit in any deportations.

-> Encourage passengers on Aeromexico Flight #681 this Thursday, October 16 to STAND UP before departure to ask that the pilots not comply with the deportation of a teenager. By standing up, the flight won’t be able to depart, and the teenager will be removed from the flight before the flight can take-off as scheduled. Please share this callout with anyone who might be on the flight.

A Montreal-area student who has lived here for more than 6 years*, will be deported to Mexico this coming Thursday morning.

The student was visiting his friends after classes at his former high school on his birthday. As a result of the actions of school officials, police were called to the school. The student did nothing more than converse with his former classmates, having entered the school when it began raining outdoors.

The student, whose identity is being protected due to his age, was handcuffed in front of other students inside the high school, and detained in a Montreal police station before being turned over to border officials. Border officials questioned the youth without a lawyer present.

If deported, the teen will be separated from his mother and family in Montreal, where they have lived together for almost a decade. Moreover, the family currently has a humanitarian and compassionate (H&C) grounds claim being considered by the federal government, which makes reference to the fact that the teenage student being deported on Thursday is hearing impaired and has special needs. They all deserve to stay in Canada, in safety and security, until their H&C claim is decided. Public money shouldn’t be spent to deport a teenager.

According to the student’s mother: “My son, a minor, was arrested in front of his friends, inside a school where he was supposed to be safe. The police and border officials did not respect his human rights as a youth. I’m devastated by the potential of being separated from my son, who together with me and my family has been building a life in Montreal.”

Solidarity Across Borders unequivocally denounces the arrest, detention and forthcoming deportation of this student, including the actions of the CBSA and the Montreal police.

We also denounce the Quebec Ministry of Education and the Montreal-area school boards. Both the Ministry of Education and Montreal-area school boards have been made aware of the reality of non-status children in Quebec by the work of the Education For All Collective, but they have refused to ensure that children can study at school without fear of being denounced to immigration authorities. It’s clear that as a result of the actions of some school authorities, a teenager who has studied in Montreal for 6 years* is now facing separation from his family and community.

We are also making a callout for community action to stop this deportation. We encourage everyone outraged by this potential deportation of a Montreal-area teenager to act. Please read more below about what you can do.

(*Solidarity Across Borders would like to correct some information: the teenage student scheduled for deportation and his family have lived in Montreal since 2008, not 2006. We have corrected this information in our callouts and would like to inform the media and public of this correction.*)

The teenage student who is scheduled for deportation this Thursday is among at least  tens of thousands of undocumented families and individuals who live in the Montreal-area. We re-iterate our demand for Status for All, meaning the regularization of all people who are undocumented in our communities. (Background: Principles for a Regularization Program in Canada: www.solidarityacrossborders.org/en/principles-for-a-regularization-program-in-canada)

We also call for a Solidarity City, meaning, in part, full access without fear to essential services like education and health care by undocumented migrants. (Background: Solidarity City Declaration: www.solidarityacrossborders.org/en/francais-declaration-pour-une-cite-sans-frontieres)

There are at least several hundred, if not over a thousand, school age children in Quebec who cannot access free primary or secondary education. Quebec is a shameful exception, compared to the City of Toronto, the United States or France, where undocumented children can access primary and secondary school for free.

The arrest of an undocumented teenager at a Montreal-area school is shocking, and reveals the inaction of the Quebec Minister of Education and related school boards on this issue. The Collectif éducation sans frontières has previously issued several calls to action to the Minister of Education and Montreal-area school boards to correct Quebec’s shameful situation concerning the education of undocumented children and youth. (Background: Demands on the government: http://collectifeducation.org/les-changements-necessaire-au-niveau-provincial/?lang=en; Demands on school boards: http://collectifeducation.org/ce-que-peuvent-faire-les-commissions-scolaires/)

i) PICKET AT MONTREAL AIRPORT: THURSDAY AT 7:30AM

If you live in the Montreal-area, we encourage you to mobilize in large to the Pierre Trudeau International Airport this coming Thursday, October 16 at 7:30pm. We will be gathering at the departures section, where the line-ups for Aeromexico will be, in order to picket and demonstrate against the scheduled deportation of a Montreal-area teenager.

If you can join us at the airport, please confirm by e-mail: solidaritesansfronteires@gmail.com

You can take the 747 bus to the airport (if you have a monthly pass or day pass, there is no additional cost). The 747 schedule is linked here: http://www.stm.info/sites/default/files/planibus/en/747.pdf

We are trying to arrange traveling by group on public transit, and if possible by car as well. If you would like to coordinate travel or you can help drive people to the airport, contact us at solidaritesansfrontieres@gmail.com
—

ii) PHONE AEROMEXICOThe deportation will take place on Aeromexico flight #681 (Montreal-Mexico City). You can phone them toll-free number at 1 (800) 237 6639. Choose your language option, listen to the recorded announcements, and then press “1” to convey that Aeromexico should not allow a teenager to be deported alone, without his mother. Aeromexico should not be complicit in any deportations.
—iii) ENCOURAGE PASSENGERS TO STAND UPEncourage passengers on Aeromexico Flight #681 this Thursday, October 16 to STAND UP on the plane before departure to ask that the pilots not comply with the deportation of a teenager. By standing up, the flight won’t be able to depart, and the teenager will be removed from the flight in question. Please share this callout with anyone who might be on the flight.
—iv) WRITE AND CALL FEDERAL MINISTERS OF IMMIGRATION AND PUBLIC SECURITYContact both Minister of Immigration Chris Alexander and Minister of Public Safety (responsible for the CBSA) Steven Blaney together and urge them to cancel the deportation order at least until the humanitarian claim of the teenager being deported is properly studied.Contact information for Minister of Immigration Chris Alexander:
Ottawa: Telephone: 613-995-8042 ; Fax: 613-996-1289
Toronto: Telephone: 905-426-6808 ; Fax: 905-426-9564
E-mails: Chris.Alexander@parl.gc.ca AND Minister@cic.gc.caContact information Public Safety Minister, responsible for the Canada Border Services Agency (CBSA), Steven Blaney:
Ottawa: Telephone: (613) 944-4875; Toll Free: 1 (800) 830-3118
Quebec City: Telephone: 418-830-0500 ; Toll-free: 1-877-630-0500 ; Fax: 418-830-0504
E-mails: Steven.Blaney@parl.gc.ca AND ministerpublicsafety@ps-sp.gc.ca
—v) WRITE AND CALL THE QUEBEC MINISTERS OF EDUCATION AND IMMIGRATION

Contact both the Quebec Minister of Education, Yves Bolduc, and Minister of Immigration, Kathleen Weil and ask them to intervene in this case. Also denouce Quebec’s refusal to ensure that all students, including undocumented children and teenagers, are student at primary and secondary schools for free.

We encourage your donations to help this teenage boy and his family as they struggle against a deportation. You can donate by cheque or paypal:

By paypal:
Visit: www.solidarityacrossborders.org/en/donate
When donating please indicate clearly that your donation is for the “Kent Family” and also send an e-mail to solidaritesansfrontieres@gmail.com confirming your donation.
—

If you’re able to undertake any of the above actions, please let us know by e-mail at solidaritesansfrontieres@gmail.com to provide a report-back (or to confirm you’re coming on Thursday).

← Solidarity disruption: Activists stage a disruption at the Immigration and Refugee Board in solidarity with migrant detainees
Support a Montreal woman facing double punishment after more than 20 years in Canada →