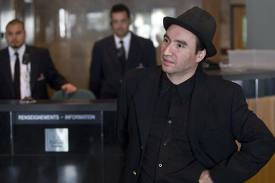 Victor Morales has lived in Montreal since he was seven years old. He is now 40 years old. His family was accepted as refugees to Canada after fleeing Chile under Pinochet in the late 70s. Victor became a permanent resident of Canada, but he is not a Canadian citizen.

After living and working in Montreal for 32 years, Victor Morales was slated to be deported to Chile in February 2011. Victor contested his deportation order at the Federal Court on humanitarian grounds, citing the best interests of his children, the protection of family life, and the well-being of his terminally ill mother for whom he is the main caregiver. His mother’s doctor, MD Sylvie Vezina, warned in a letter submitted to the court that his deportation would negatively impact the elderly woman’s health.

During the hearing on January 31, Citizenship and Immigration Canada’s (CIC) legal counsel, Sylvie Brochu, argued that Mr. Morales’s deportation order should be carried out without further ado because of the street musician’s alleged “great criminality.”

Yet this argument was rejected by Judge Yves De Montigny, who observed in his decision to stay the deportation that Morales was not “someone who had committed serious criminal infractions.” Moreover, the judge reiterated that CIC is obliged to consider the best interests of the children when making any decision regarding this case. In fact, the judge highlighted the concerns raised by Morales’s lawyer and scolded the CIC officer for “not having considered the interests of the children of the claimant” and for having “rejected several support letters without valid reason solely because they came from members of Morales’s family.”

According to Morales’s lawyer, Stewart Istvanffy, “Canada is one of the few countries that deports people who have committed a minor infraction, and who have children”, which he deems to be “an obvious violation to international law”.

On October 12th, nine months following the stay of deportation, Victor Morales went before the Federal Court to request a judicial review of the negative decision rejecting his humanitarian and compassionate claim for permanent residency. His lawyer argued that the deportation imposes undue hardship on Victor, who would be punished a second time for an offense he has already paid for. This second punishment (also known as double punishment) would abruptly end Victor’s life here in Canada and would rob the Morales family of a loving father and son.

Victor is painfully awaiting the Federal Court decision regarding the request for a judicial review.

Victor has worked hard to build a vibrant life in Quebec as a musician. He plays an essential role in the care for his children and his ill mother, a 65 year old Canadian citizen.

In recent years, Victor has successfully worked to overcome trauma and addictions common to adults who as children witnessed domestic abuse in their own families. Treatment from a Post-Traumatic Stress (PTS) clinic has helped him find healthier ways of coping with PTS stemming from early childhood experiences living with an abusive, alcoholic father who was violent towards his mother. While he was suffering from untreated PTS and addictions, he was charged with minor offenses including possession of marijuana. He has already paid for these offenses in jail time. After successfully completing an Alcoholics Anonymous program, he has since 2004 overcome his own battle with alcoholism and drug addiction. For seven years now, Victor has not returned to jail, and he has not touched alcohol or drugs.

He is proud to have forged a new path, with a renewed commitment to be involved in his children’s lives, as well as providing indispensable live-in care for his ailing mother. Every day he cooks dinner for his kids. He is deeply committed to being as present as possible for his children, encouraging them in their studies, and steering them away from alcohol and drugs. He is also an active member of an Evangelical church in the heart of the Villeray neighborhood.

Years after Victor has paid for the minor offenses he committed during his troubled past, the Harper government is trying to make him and his family pay for them again, a second time.