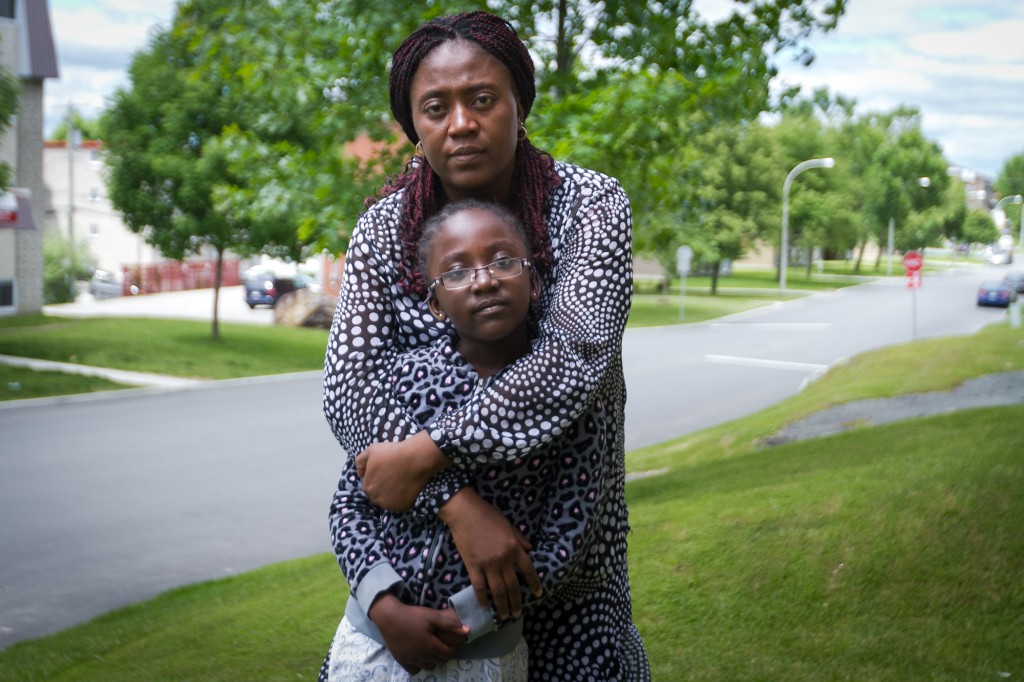 SARAH MAGGALI AND HER DAUGHTER, KEZIA HOPE, TO BE DEPORTED THIS FRIDAY
SHERBROOKE FAMILY FACING SEPARATION
MOTHER TO BE SEPARATED FROM 3 YEAR-OLD SON AND INFANT DAUGHTER
Press Point / Gathering in support of the Pika Family
THURSDAY, JULY 3, 10am
200 René-Lévesque West, between St-Urbain and Jeanne Mance (Montreal)
(métro Place d’Armes or métro Place-des-arts)
-> Hear directly from Sarah Maggali and Kezia Hope in the following video: www.youtube.com/watch?v=SkGJaFx0xek
-> For more info, visit: www.solidarityacrossborders.org/famillepikaSolidarity Across Borders is urging support for the Pika Family of Sherbrooke in their attempt to remain united together in Quebec, where they have lived for five years. Sarah Maggali, the mother of the family, along with their eldest daughter, Kezia Hope (7 years old) are facing removal to the Republic of the Congo on July 4, 2014 (in less than one week!). They will be separated from Pacôme Pika, the father of the family and a graduate student, as well as the two youngest children who were born in Canada: Keren Elicha (3 year old son) and Khelen Mercy (5 month old daughter).The deportation order is based primarily on two factors: i) the failure to pay an administration fee for re-establishing Sarah Maggali’s status during a period of time, during the student strike, when Mr. Pika was unable to obtain a bursary; ii) discrimination by an immigration agent against Sarah Maggali due to her diabetes.Neither of these factors should result in the separation of a family, particularly the separation of a young mother from her small children, including a 5 month infant, and the separation of a daughter from her father.Pacôme Pika has been a graduate student in Quebec since 2008, having studied variously at the Université du Québec Rouyn-Noranda, the Université de Sherbrooke and currently the Université de Laval in Quebec City. His family followed in 2009, and since being here have settled in Sherbrooke and are active members of the community.WHAT YOU CAN DO[Please attend the following gathering and show your direct support with the Pika Family: THURSDAY, JULY 3, 10am at 200 René-Lévesque Ouest, in Montreal.]

Your letter to the federal ministers should urge them to stop the deportation of Sarah Maggali and Kezia, and allow them to stay in Canada with the rest of their family. Your letter to the Quebec Minister of Immigration should urge her to personally intervene in this file and to grant Sarah Maggali a Certificat de sélection du Québec (CSQ) as someone who has been settled in Quebec for five years.

We would encourage you to also phone each of the three Ministers as well. Contact information is included below. The full names of Sarah Maggali and Kezia are: Sarah Maggali Namoutiri and Kezia Hope Pika.

Thank you for your solidarity and support for the Pika Family.

i) CONTACT Minister of Immigration Chris Alexander and Minister of Public Safety Steven Blaney together and urge them to cancel the deportation order against Sarah Maggali Namoutiri and her daughter Kezia Hope Pika.

E-mail: cabinet@midi.gouv.qc.ca
—–Please contact solidaritesansfrontieres@gmail.com to let us know that you’ve written letters and/or phoned the Ministers. Please confirm, if you can, that you can attend on Thursday (tomorrow!) as well.

← Call to Action: Stop the Deportation of Sarah Maggali and her daughter Kezia Hope
Solidarity Across Borders presents Lido Pimienta (a fundraiser against Double Punishment) →