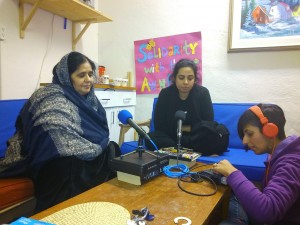 When: Thursday, February 27th, 12pm-1pm
Where: outside CIC and CBSA offices, 1010 St-Antoine (metro Bonaventure)
** Free spiced hot chocolate will be served
** Featuring a creative visual action to honour some of those lives lost or left in suspension due to violent and unjust immigration laws

On February 27th, it will have been six months that Khurshid Begum Awan took sanctuary in a Montreal church. In August 2013, she made the courageous decision to defy a removal order which would have seen her returned to Pakistan, where she faces targeted violence, lack of access to appropriate medical care, and indefinite separation from her daughter and grandson, who live in Montreal.

The practice of sanctuary represents community resistance to violent and unjust immigration laws. Over the past decade, dozens of individuals and families have made the extremely difficult decision to take sanctuary in churches across Canada. Marked by increasingly racist and exclusionary measures, the Canadian immigration system forces people to make increasingly difficult choices. From the historic strike waged by detained migrants to denounce their conditions at the Central East Correctional Centre in Lindsay, Ontario, to the tragedies of Lucia Vega Jimenez and the Wajli family, migrants across the country are finding themselves in situations of tremendous precarity, sometimes even resorting to death rather than facing detention and deportation.

This picket also aims to highlight the courageous decisions taken by many people and families to take sanctuary. We will honour those who had no other choice but to give up their personal and physical freedom and confine themselves behind walls, often facing protracted waits fraught with uncertainty, in order to seek justice and safety.

On Thursday, February 27th, 2013 the Awan Family Support Committee invites groups and community members to make it downtown for another noon-hour picket in front of Citizenship and Immigration and CBSA offices. Join us to express our rage and solidarity with the Awan family, with the families who are living in sanctuary in Vancouver and Toronto, and with those whose lives have been lost or left on hold.

More info on the Awan family’s struggle for justice:

← Downloads for the anti-racist demonstration on March 21 (posters, flyers)
(Updates) Solidarity with Carlos, Amelie and Fallon ! →