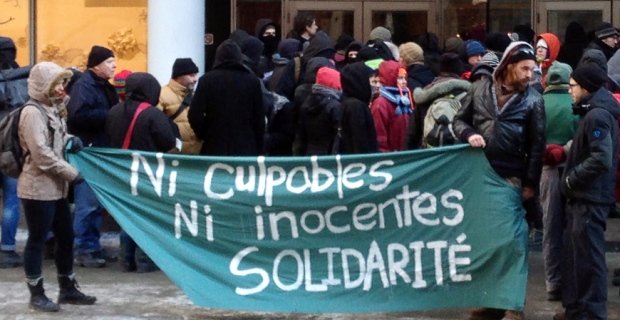 From friends of Amelie, Carlos and Fallon

On Sunday, January 5th, two groups of people threw rocks and molotov
cocktails at the offices of the Ministry of Communications and Transport
and at the vehicles of a Nissan dealership in Mexico City.
The same night, Carlos, Fallon, and Amelie were arrested in downtown
Mexico city for these attacks. Initially detained by the Ministry of
Public Safety for the Federal District (Mexico City), their case was
shortly thereafter transferred to the federal jurisdiction.

On January 9, the comrades were placed under arraigo, a special
investigative measure, based on a allegations from the Prosecutor’s
Office of federal crimes, including terrorism, sabotage, organized
crime, and damage to public property. The arraigo allows the
Prosecutor’s Office to hold any suspects up to 40 days pending
investigation without appearing before a judge and without formal
indictment.

At the end of the arraigo, Amelie and Fallon were transferred to the
Centre de Réadaptacion Santa Martha, a women’s prison where they are
still detained, and Carlos was transferred to Oriente, a men’s prison.
Both are state-level prisons.

On the 20th of February, the comrades appeared before a judge. In
light of a lack of evidence, the federal charges for which the arraigo
was granted were not pursued. Amelie, Fallon, and Carlos are now
facing: breach of peace, and damage to property while acting as a
group. The comrades appealed the charges, and are currently faced with
the possibility that Nissan will accept a restitution of $10 000 for
the damages to their property. This would mean that Carlos, Amelie,
and Fallon would be able to get bail for the charge of breaching the
peace. The bail amount is not known at this point.

If Nissan refuses the restitution offer, the judge then has 15 days to
decide whether to release the three accused or not. If the judge
refuses, they will stay in prison until their trial, which could take
between six months and a year.

In Mexican prisons, all services and needs are paid for out of pocket.
This includes calling cards and personal effects, as well as water,
food, a place to sleep, etc. Thus, while Amelie, Carlos, and Fallon are
detained, there is a significant need for money.

Write a cheque to: Convergence des lutes anti-capitalists (PLEASE INDICATE
MEXICO IN THE SUBJECT LINE) and send to:

Freedom for Carlos, Amelie and Fallon !

Freedom for Mario, Salvador and Fernando !

← (February 27, 12pm) From Behind Church Walls: A picket in solidarity with the Awan family and other sanctuary struggles
Ivonne Regains Custody (at least for now)! The Struggle for Status Continues →