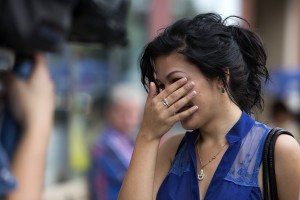 August 2nd is the day to remember the genocide of Roma people in Europe during the Second World War, so that such atrocities would never happen again. But the xenophobic extreme right is again on the rise in Europe.

Katalin Lakatos and her daughter Gilda, two Roma women from Hungary who have been fighting their deportation from Canada since their refugee claim was refused over a year ago, have been ordered deported on 11 August.

Here is a letter that 17-year old Gilda wrote about her long, long struggle to remain in Canada, about why her family left Hungary and does not want to return.

To find out how to support this family, click here.

My name is Gilda. I am 17-years old and I am Roma. I came to Canada with my mother, my father, and my brother five years ago. We came here to escape the racism, violence and discrimination we suffered in Hungary.

As a Roma family, we always lived in fear, but in the last years, things got worse. On television politicians were saying things like, “Gypsies are parasites we must eliminate”. Groups of “skinheads” dressed as soldiers with Nazi flags marched around Roma villages. They stopped in front of Roma houses and chanted, “Here you will die.” A family was killed. I was afraid to walk in the streets by myself, especially after my mother made a complaint against the police about the death of my brother. We were threatened and insulted sexually in the streets. These attitudes were everywhere. We couldn’t live a normal life.

In Hungary, school was difficult. Roma kids were separated from non-Roma Hungarian kids. We couldn’t play with the other children. There were special classes just for Roma. Our teachers never came to the class and even when they were there they didn’t answer our questions.

Racism in Hungary is everywhere, even in the hospitals. I was 11 when my other brother got very sick. We went to the hospital, but they didn’t want to help him. The doctors said there was nothing the matter with him and sent us home. Next day, he was even worse, he vomited blood, he had a high fever, and he couldn’t even get out of bed or walk. We called the doctor to come but he said he was too busy.

Next morning, he could hardly breathe, my father carried him to the hospital and the doctors had to send him to Budapest because his life was in danger. In Budapest, his heart stopped and he fell into a coma for five days. It was the second time that I almost lost a brother to racism and discrimination. The doctor told us that it could have been avoided if he had been seen earlier. In Hungary, Roma are often refused treatment by doctors. For my mother it was even more difficult, just when she had started to feel better she almost lost another son. My parents were both very depressed. We didn’t know what to do, it was just too much. Thank goodness, my brother awoke from the coma but we could no longer put up with it all. We came to Canada.

For five years in Canada, we had a good life. I was in school and was treated like other kids. I did well, there were school activities like a volunteer programme at an old age home for women, I learned to speak French, and to play basketball.

I made lots of friends at school. We went out and did things together. We talk regularly and they support me a lot. They helped me get through my past; gave me hope, they made me feel like everything was possible. This was so important to me, because in Hungary, I didn’t have non-Roma friends, nobody would talk to us because we are Roma. They would say, “we don’t talk to Gypsies.” I don’t want to lose my Canadian friends.

I feel hopeless when I think of my future. I don’t understand why we were refused, why they want to send us back to Hungary.

In April 2015, our refugee claim was refused. In September we put in an application for permanent residence on humanitarian grounds. In October we asked to be able to stay in Canada until there was a response on our humanitarian application. We felt terrible when they refused to allow us to wait for a response.

This was one of the most difficult times for my family. For five years, we had been able to live a normal life. We were like others for the first time, we were safe. We had such hope. The idea of returning to Hungary brings back all these memories; the slogans, the constant discrimination in all parts of our lives – school, work, hospital, in the streets. There is no escaping it, anywhere.

They ordered us to leave Canada on October 30th. We stayed and became “non status”, at risk of being arrested and deported at any time.

Because of this, I couldn’t finish high school. After the deportation order, I was afraid of continuing school. My classmates asked what was going on with me and my family and it was humiliating to have to explain my story and why I had to stop school.

In March, my father and brother were arrested during a routine police check of the car they were traveling in. After they were detained, my mother and I turned ourselves in to Immigration on March 8th. We were put in detention in Laval. We were in a kind of prison for 10 days. This was very hard on my mother and me. We were placed in a segregated section. We were alone with our thoughts and had nothing to do except think about all that had happened to us and what would happen to us back in Hungary.

My brother and father were deported a few days after we were put in detention. Now they are living in a lot of insecurity in Hungary. I am worried about my father. He tells me that he can’t sleep or eat. My mother and I are always worried about something happening to them.

I am also worried for my mother; her health is not good. The death of my oldest brother was very hard on her. Since his death she has suffered from depression a lot of the time. The uncertainty we have been living since our refugee claim was refused in April 2015 really affected her, and almost every difficulty has become too much for her. After we got out of the Laval detention centre, she didn’t get out of bed for three days. She hardly talked for those three days. I didn’t know what to do.

I am trying really hard but it is not easy. All these things have left a mark on me, forever. When I think about it, I become very stressed, I am afraid.

It is hard for me to even think about going back to Hungary. In Canada, I can live a normal life. I have dreams for the future, for my life in Canada. I want to continue school, finish high school, go to CEGEP and then university. I would like to work as a manager in a business or become a lawyer …

On May 12th, we were supposed to be deported to Hungary but we appealed to the minister to stay. With the help of friends and organizations who are supporting us, we got a temporary permit to stay until July 16th. I was relieved but also disappointed because we could still be deported. We were still in complete uncertainty.

And now we have been asked once again to leave, this time August 11th.

These are the reasons that I am appealing to be given the chance to stay. With my family, I want to continue to build my future here, in Canada, which is also my country.