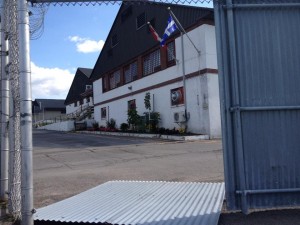 Montreal, 12 August 2013 — Montrealers tore down part of the fence surrounding the Laval Immigration Detention Centre yesterday in an act of spontaneous collective rage.

Earlier that day, about a hundred people gathered in the shadow of the wall to stand in solidarity with those who have been detained and deported. Silhouettes depicting loved ones from whom we’ve been separated and bright banners were fixed to the fence. Messages of solidarity in Arabic, Hungarian, Spanish, Urdu, English, and French were read aloud, while remnants of clothing were strung along the length of the wall, symbolizing the violence experienced at border crossings around the world.

To ensure that regular visiting hours could ensue, the demonstration withdrew to a grassy area for a picnic with food, music, and speeches in the sunshine. During the picnic, someone on the inside informed the organizers that, because of the demonstration, visiting hours had been cancelled all day, prisoners were being punished by having prayer time revoked, being prohibited from smoking, and being confined to their rooms.

Participants were outraged at the detention centre’s attempt to further isolate and repress detainees for simply being supported by those outside.

“We denounce this effort to deter solidarity and divide struggles on the inside from those on the outside,” said Amy Darwish, an organizer.

Led by powerful music and chants, demonstrators returned to the wall. Infuriated, they began pounding on the fence and under the pressure of their rage, it crashed to the ground. According to another organizer, Leah Freedman, “It was a political moment where we exited any pre-existing plan and became a movement.” (Photo of torn-down fence: http://bit.ly/16Ew8Lm)

One of the MCs of the event, Farha Najah Hussain said, “I leave that place full of rage, but also with much heart, witnessing the breaking and falling of a wall, hoping that people on the ‘inside’ felt our solidarity. I trust that one day all prison cells will be eliminated, barbed wire fences overturned, and borders erased. One day there won’t be those on the ‘inside’ and ‘outside’. One day we will meet. Until then the struggle for justice and dignity continues.” 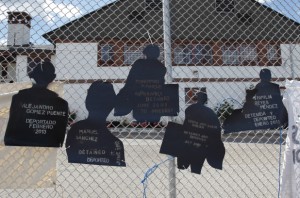 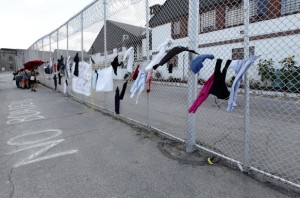